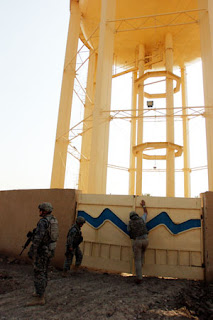 FOB MAHMUDIYAH — A water pipeline that will connect the city of Al Rasheed to the city of Mahmudiyah is nearing completion.

“People who have been limited on their water supply within the city will soon not have to worry about such issues,” said Sgt. Hamad Ali Kathwan, 25th Brigade, 17th Iraqi Army Division.

The goal in this project is to demonstrate to the Mahmudiyah Qada the local government’s ability to recommend, plan and complete a project, said Maj. Alaric Robinson, a native of Hartford, Conn., Company A, 411th Civil Affairs Battalion.

The project began May 25, and the pipe is expected to provide water to 25 percent of the city of Mahmudiyah by the end of August. The pipe is 20 inches in diameter and will span a distance of nine kilometers.

“The local water director came to us and identified demand [for water] in Mahmudiyah as well as excess supply in Al Rasheed. We provided the pipe, and the GoI is providing the funding for the installation, testing and connection of the pipe – everything but the pipe itself,” he said.

Each section of pipe comes in 9-foot pieces. After the pipe is put together, it will be tested to ensure a steady water pressure is maintained over a 24-hour period.

“The government of Iraq did the technical piece of the project so that it was completed to their standards and their specifications,” Neusse said.

The contractor hired 15 workers from the Mahmudiyah area, providing employment to people from the community for which the pipeline will be providing water.

“If you train and mentor young local leaders, their individual accomplishments will instill confidence to build cities and neighborhoods without the assistance from Coalition forces,” said Robinson.