The 1st Battalion Scots Guards (1SG) paraded in Inverness today, Thursday 30 May, to mark their return from a 6-month tour in Afghanistan. 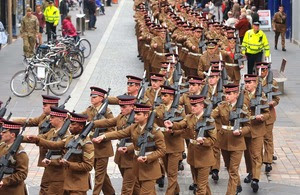 It is a great honour to be marching through the streets of Inverness today. The Guardsmen are very proud of their work and they are humbled to be able to parade in front of the people of Inverness.

The Battalion has had a challenging 6 months in Afghanistan and today’s parade recognises its achievements. It also gives their friends and families an opportunity to celebrate their safe return and accomplishments of the last few months.


We are extremely grateful for the support we received from the local community all through the tour,” he continued.

Each week we would receive a helicopter-load of letters and parcels from well-wishers across Scotland. We were sent everything from woolly hats to chocolate and board games. It was very touching that we were being thought about at a time we were so far from our homes...


GO read the rest of one of my most favourite stories here.