Pssssst John Kerry: Iran will always be your enemy 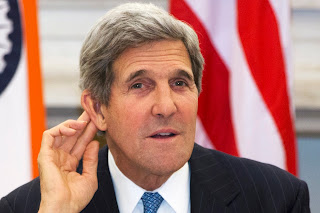 Have you noticed that Iran/US nuke 'talks' - you know, those that were extended at the last deadline - are no longer on the front pages of the media?

While the world's attention (courtesy of the msm) has been focused on the Greek situation, nobody within the Obama administration seems to have anthing to say about those Iran talks.

Iranian official: US will remain our enemy despite emerging nuclear deal

Iranian ground force commander says US seeks to "exploit nations and put them in chains."

Iranian Ground Force Commander Brigadier General Ahmad Reza Pourdastan said that even if a nuclear deal comes to fruition in Vienna, where Iranian and western negotiators are currently trying to reach an agreement by a Tuesday deadline, Tehran and Washington will not become friends.

The US might arrive at some agreements with us within the framework of the Group 5+1 (the US, Russia, China, Britain and France plus Germany), but we should never hold a positive view over the enemy,"  Iran's Fars News Agency quoted Pourdastan as saying.

"Our enmity with them is over the principles and is rooted because we are after the truth and nations' freedom, but they seek exploiting nations and putting them in chains," he explained further....


Yes, there is much more, along with other interesting links, here.

Related:  Netanyahu says nuke deal getting worse by the day
Posted by The Brat at 1:34 AM