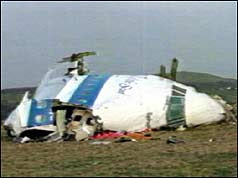 The plane was headed for New York

1988: Jumbo jet crashes onto Lockerbie
A Pan Am jumbo jet with 258 passengers on board has crashed on to the town of Lockerbie near the Scottish borders.
Initial reports indicate it crashed into a petrol station in the centre of the town, between Carlisle and Dumfries, and burst into a 300-foot fireball.
Hundreds are feared dead as airline officials said flight 103 was about two-thirds full with 255 adults and three children on board.
Rescue teams have confirmed there are many casualties at the scene including townspeople who were on the ground.
The Boeing 747 left London Heathrow at 1800 GMT bound for New York's JFK airport...


In Context
In total 259 people aboard the flight and 11 on the ground died in the crash which took place 38 minutes after take-off.
The debris from the aircraft was scattered across 845 square miles and the impact reached 1.6 on the Richter scale.
The subsequent police investigation was the biggest ever mounted in Scotland and became a murder inquiry when evidence of a bomb was found.
Two men accused of being Libyan intelligence agents were eventually charged with planting the bomb.
Abdelbaset ali Mohmed al-Megrahi was jailed for life in January 2001 following an 84-day trial under Scottish law, at Camp Zeist in Holland.
His alleged accomplice, Al Amin Khalifa Fhimah, was found not guilty.
In 2002 Al Megrahi's appeal against conviction was rejected. [both pieces from BBC here] 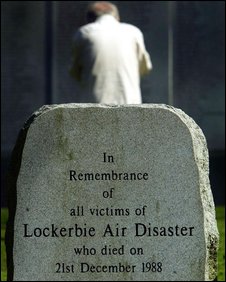 A number of ceremonies are planned
in Lockerbie throughout the day

Special "places to remember" are being opened in Lockerbie, with a wreath-laying ceremony taking place at the Dryfesdale Ceremony.
In the evening there will be services at both the Tundergarth and Dryfesdale Church.
A little after 1900 GMT the exact anniversary of the atrocity will be remembered.
For many who lived through it, the memories remain fresh despite the time which has passed.

George Stobbs, Lockerbie's police inspector at the time, recalls the events of 20 years ago with great clarity.
"Nobody actually knew what had happened, we realised an aircraft had come down but I thought it was a military aircraft," he said.
"Once I got into Sherwood Crescent I could see flames along the roadside, the footpaths were burst and there were gas pipes fractured - there were dancing flames coming up from them.
"Hedges were on fire, drop pipes on the side of houses were on fire and they were in turn climbing up and setting fire to the roofs."
It was only later in the evening that the scale of the death toll at Lockerbie began to emerge.[here]


It is said that those who forget history, are doomed to repeat it. Will YOU forget?

Email ThisBlogThis!Share to TwitterShare to FacebookShare to Pinterest
Labels: Lockerbie

I do remember Brat! The saddest part is... I was young and ignorant to what was going on with terrorism back then, so I didn't understand the evil that had happened to those people.