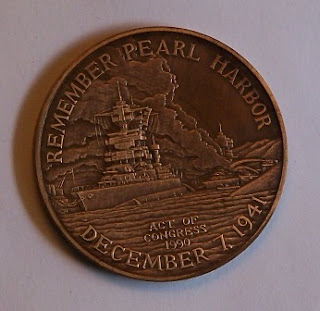 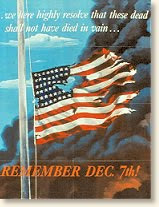 Japan has launched a surprise attack on the American naval base at Pearl Harbor in Hawaii and has declared war on Britain and the United States.

The US president, Franklin D Roosevelt, has mobilised all his forces and is poised to declare war on Japan.

Details of the attack in Hawaii are scarce but initial reports say Japanese bombers and torpedo-carrying planes targeted warships, aircraft and military installations in Pearl Harbor, on Oahu, the third largest and chief island of Hawaii.

News of the daring raid has shocked members of Congress at a time when Japanese officials in Washington were still negotiating with US Secretary of State Cordell Hull on lifting US sanctions imposed after continuing Japanese aggression against China....


At 0755 local time the first wave of between 50 and 150 planes struck the naval base for 35 minutes causing several fires and "untold damage" to the Pacific Fleet.
The Japanese squadrons dropped high-explosive and incendiary bombs.
A second strike followed at about 0900 when a force of at least 100 planes pounded the base for an hour.
*****


"At approximately eight o'clock on the morning of December 7, 1941, I was leaving the breakfast table when the ship's siren for air defense sounded. Having no anti-aircraft battle station, I paid little attention to it. Suddenly I heard an explosion. I ran to the port door leading to the quarterdeck and saw a bomb strike a barge of some sort alongside the NEVADA, or in that vicinity. The marine color guard came in at this point saying we were being attacked. I could distinctly hear machine gun fire. I believe at this point our anti-aircraft battery opened up.
"We stood around awaiting orders of some kind. General Quarters sounded and I started for my battle station in secondary aft. As I passed through casement nine I noted the gun was manned and being trained out. The men seemed extremely calm and collected. I reached the boat deck and our anti-aircraft guns were in full action, firing very rapidly. I was about three quarters of the way to the first platform on the mast when it seemed as though a bomb struck our quarterdeck. I could hear shrapnel or fragments whistling past me. As
soon as I reached the first platform, I saw Second Lieutenant Simonson lying on his back with blood on his shirt front. I bent over him and taking him by the shoulders asked if there was anything I could do. He was dead, or so nearly so that speech was impossible. Seeing there was nothing I could do for the Lieutenant, I continued to my battle station.
"When I arrived in secondary aft I reported to Major Shapley that Mr. Simonson had been hit and there was nothing to be done for him. There was a lot of talking going on and I shouted for silence which came immediately. I had only been there a short time when a terrible explosion caused the ship to shake violently. I looked at the boat deck and everything seemed aflame forward of the mainmast. I reported to the Major that the ship was aflame, which was rather needless, and after looking about, the Major ordered us to leave.
"I was the last man to leave secondary aft because I looked around and there was no one left. I followed the Major down the port side of the tripod mast. The railings, as we ascended, were very hot and as we reached the boat deck I noted that it was torn up and burned. The bodies of the dead were thick, and badly burned men were heading for the quarterdeck, only to fall apparently dead or badly wounded. The Major and I went between No. 3 and No. 4 turret to the starboard side and found Lieutenant Commander Fuqua ordering the men over the side and assisting the wounded. He seemed exceptionally calm and the Major stopped and they talked for a moment. Charred bodies were everywhere....

More from Marine Corporal E.C. Nightingale, and other eyewitnesses that day, here. 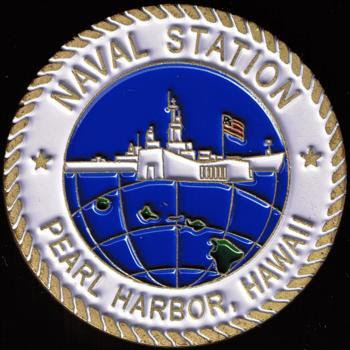