Omar Khadr has just been sentenced to 40 years by the military jury in GITMO. He will not serve that, because of a plea deal prior to his admission of guilt to all charges as the military commission reached its final stages. From the BBC: 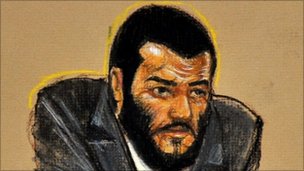 A US military tribunal has sentenced a self-confessed Islamist militant to 40 years in jail on charges that include murdering a US soldier and conspiring to commit terrorist acts.

However, Khadr's plea deal limited his sentence to eight years.

Caught in 2002 at the age of 15, he is the fifth Guantanamo inmate to be convicted at the military tribunals.

A seven-member military panel deliberated for nearly nine hours over a two-day period before reaching its decision on Sunday...(more here)

Email ThisBlogThis!Share to TwitterShare to FacebookShare to Pinterest
Labels: Khadr gets 40 years from military commission jury