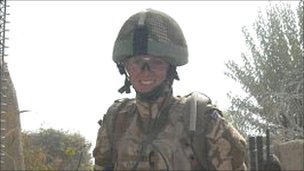 An Army medic from North Tyneside has received the Military Cross for courage after she helped wounded colleagues in Afghanistan while under fire.

L/Cpl Sarah Bushbye, 25, is only the third British Army woman to be awarded the honour. She received it earlier during a ceremony at Buckingham Palace.

Following an attack by suicide bombers in December 2009, she gave medical care to injured British and Afghan comrades.

Her professionalism and courage were described as "extraordinary".

L/Cpl Bushbye's citation told how she ignored the risk of sharpshooters and Improvised Explosive Devices to cross 500m of open valley to reach injured colleagues.

It said she kept her head, reporting to her commander and advising soldiers who were assisting her.

Her composure and clear direction was said to have calmed the shaken men, as she moved between the casualties, and administered resuscitation to one soldier who had stopped breathing....

There is more, plus a video of the ceremony, over at the Beeb here.

L/Cpl Bushbye, you ROCK! Thank you for your service.

[Addendum: My pal Kathi sent me a link to a column on what Remembrance Day means to war heroes, and this L/Cpl is quoted at length in it:

On Wednesday she was presented with the Military Cross by the Queen at a ceremony at Buckingham Palace to mark her extraordinary valour on the field of combat.

Today she is taking part in a Remembrance Sunday parade through the streets of Sunderland.

It will be a moment of pride and not a little sadness. Pride in the army which she serves so well and sadness for fallen comrades who cannot be there with her. In a nutshell, she says that is the importance of Remembrance Sunday.

Sarah, 26, said: “Even when I was younger, before I joined the army, it was still important to me. It gives everybody a feeling of what people went through so we are free today.

“It brings us together and shows that people are thinking of what has been done for the country. It feels like old times when we all stuck together.”

The principle of sticking together and helping each other out was fundamental to Sarah’s actions which led to the former George Stephenson High School pupil of Killingworth, North Tyneside, becoming only the third woman in the British Army to receive the Military Cross.

She is now in training to go back to Afghanistan in 2012, a theatre of war which continues to add to those who fight and fall in the line of duty for their country.

Remembrance Sunday is now part of letting the troops know they are thought of back home.

“On Remembrance Sunday, even if you don’t know anybody personally in the country who has fought, in some ways it does affect everybody in a small way.”...

There is more. Go read it here.

Thank you, for your Every Day Hero posts, telling us about inspiring people like this young woman.