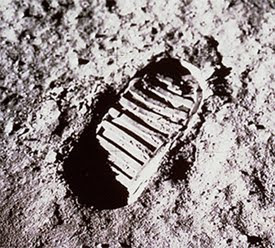 The first footprints on the Moon will be there for a million years. There is no wind to blow them away. (Much more from NASA here) 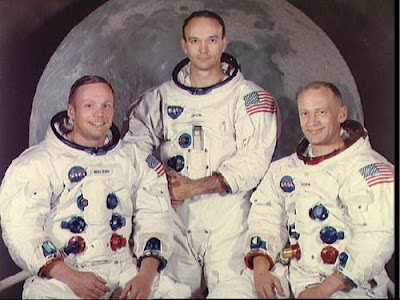 The sign the astronauts left on the moon says, "Here men from the planet Earth first set foot upon the moon July 1969, A.D. We came in peace for all mankind." Image Credit: NASA


1969: Man takes first steps on the Moon
American Neil Armstrong has become the first man to walk on the Moon. The astronaut stepped onto the Moon's surface, in the Sea of Tranquility, at 0256 GMT, nearly 20 minutes after first opening the hatch on the Eagle landing craft.
Armstrong had earlier reported the lunar module's safe landing at 2017 GMT with the words: "Houston, Tranquility Base here. The Eagle has landed."
As he put his left foot down first Armstrong declared: "That's one small step for man, one giant leap for mankind."
He described the surface as being like powdered charcoal and the landing craft left a crater about a foot deep.
'We came in peace'


Much more from the BBC here.

The Eagle still flies!
Posted by The Brat at 4:35 PM

Email ThisBlogThis!Share to TwitterShare to FacebookShare to Pinterest
Labels: Apollo 11, Man on the Moon