‘Miracles on Mountainside’ for Disabled Vets 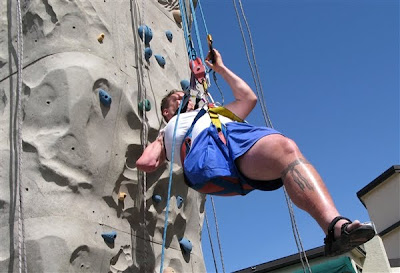 Jon Engles, who lost his right leg and most of his right arm in a 2000 motorcycle accident, experiences his own personal miracle climbing a rock wall and skiing at the National Disabled Veterans Winter Sports Clinic. DOD photo by Donna Miles

“Tomorrow, each of will start chasing your miracles on the mountain,” he told the veterans as they prepared to kick off a six-day clinic jam-packed with sporting events designed to push them to new heights and enhance their rehabilitation.

Midway through the clinic, even some of the skeptics say they’re experiencing firsthand why the popular event, now in its 26th year, has come to be known as “Miracles on a Mountainside.”

Anthony Jeffries admits he resisted coming to his first clinic this year. A Marine Corps veteran rendered a quadriplegic during a 2007 car accident, he said the staff at his VA treatment facility in California “practically beat me with a stick” to get him to participate. “It was the fear of the unknown,” he said.

But on the clinic’s opening day, Jeffries accomplished something he never dreamed possible, skiing down Snowmass Mountain on adaptive skis. “I don’t smile much, but I was smiling a lot then,” he said. For Jeffries, the run down the mountain was the springboard to a whole new world of opportunity. Now he’s looking forward to the clinic’s trapshooting event, which he hopes will be a foray to his longtime love of hunting.

Jeffries’ mother, Nancy Barrington, said she’s seeing the change in her son since arriving here. “He’s starting to open up,” she said. “He’s seeing that there are still things he can do.”

Jeffries agrees. “I figure that if I can ski down a mountain, I can probably do a lot of other things that I thought I would never be able to,” he said....

MUCH more, and more pictures here.