It is with great sadness that the Ministry of Defence must confirm the deaths of Sergeant Luke Taylor, of the Royal Marines, and Lance Corporal Michael Foley, of the Adjutant General's Corps (Staff and Personnel Support), in Afghanistan on Monday, 26 March 2012. 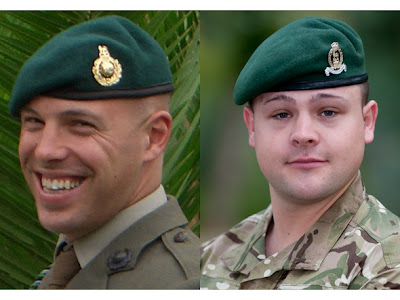 The two men were serving as part of Task Force Helmand when they were shot and killed at the main entrance to Lashkar Gah Main Operating Base in Helmand province.

"I was very saddened to learn of the deaths of Sergeant Luke Taylor and Lance Corporal Michael Foley, brave and committed British servicemen who died in the most tragic of circumstances whilst on operations. They died in the service of their country; they were in Afghanistan to protect Britain's national security.

"Both men were known to their colleagues for their professionalism and military qualities, but outside of their careers, it is clear that both were also true and devoted family men. My thoughts and deepest sympathies are with all those left behind."...

Go and spend time with those who know and love these Fallen Heroes the most, here.

Always honoured.
Posted by The Brat at 9:25 AM