A great story about some of my favourite people! 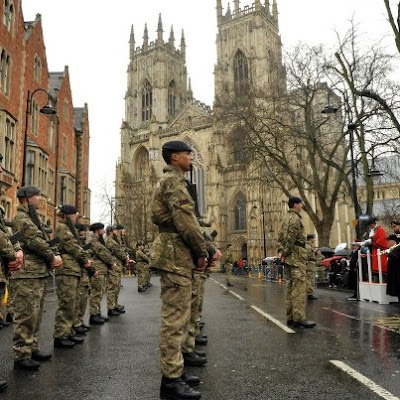 Army Medics marched through the streets of York on Saturday 9 March 2013 when they received the Freedom of the City.

The honour was bestowed on the troops following their service to the city during the floods in 2000 and their lifesaving role on operations in Iraq and Afghanistan.

Commanding Officer of 34 Field Hospital, Lieutenant Colonel Jaish Mahan said “We are incredibly grateful to the people of York for granting us this Freedom and I know it means a lot to every single one of us in the unit because it has confirmed our faith in a community that we very much regard as home.”

The Lord Mayor said: “The Freedom of the City is a rare accolade which the City Council grants only to the most deserving of regiments and military bodies. Today you will join other distinguished recipients of this coveted honour.”

Fifty-five soldiers from 34 Field Hospital, normally based at Queen Elizabeth Barracks, Strensall formed up in Duncombe Place, York before marching through the city to music from the Heavy Cavalry and Cambrai Band.

Email ThisBlogThis!Share to TwitterShare to FacebookShare to Pinterest
Labels: UK Medics gain Freedom of the City in York