Women and the British Military

Since it IS International Womens Day and all, a few stories from the MoD: 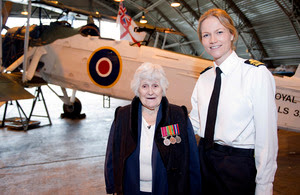 Wren Booth, today known as Beth Hutchinson, was awarded the British Empire Medal for her outstanding bravery in 1944: the first to be awarded to a female in the Royal Navy.

On the night of 18 November 1943, near Royal Naval Air Station Machrihanish, Scotland, Wren Booth, with complete disregard for her own safety, dragged a Fleet Air Arm observer from a crashed Swordfish aircraft. She removed his smouldering clothing with her bare hands, beating out the flames while explosions in the aircraft scattered debris over them. She drove the airman 9 miles to a doctor, but by the time she arrived he had died. 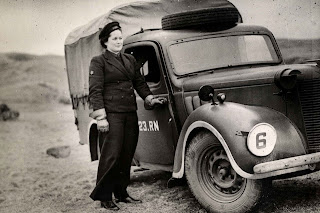 There is much more about this now great-grandmother here. 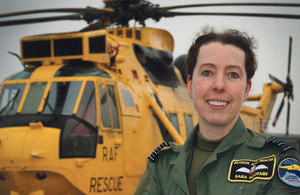 One of the Armed Forces’ top female aviators has recently taken command of the RAF’s Search and Rescue Force.

High-flying 44-year-old, Group Captain Sara Mackmin, will oversee all RAF search and rescue operations across the UK and the Falkland Islands.

The appointment is Group Captain Mackmin’s latest groundbreaking move in a career that has seen her achieve a number of firsts in the RAF.

After serving in the Balkans flying Puma helicopters she became the UK’s first female helicopter instructor and in 2000 was the first female to command an operational flying unit as a squadron leader.

In 2008 she repeated the feat as a Wing Commander. 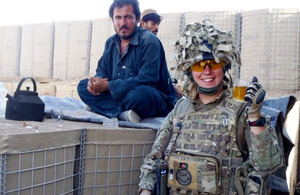 In today’s Regular Armed Forces, women are making a growing impact, with the last decade seeing the number of women increasing from 8% in 2000 to 9.7% in April 2012.

For female officers, it’s an even better story, with the number of women increasing from 8.9% to 12.4% in 2012. While over the same period, women serving in the other ranks have gone up from 7.8 to 9.1%.
Sergeant Beth Wilson is deployed in Afghanistan on her first tour of duty with 4 Armoured Engineer Squadron, 21 Engineer Regiment.

This involves checking out potential route builds, improving security bases for soldiers and the Afghan National Security Forces (ANSF) and preparing bases for closedown and handover to the ANSF ahead of transition to Afghan-led security across Helmand province.

Based in Lashkar Gah for her tour, Sergeant Wilson said:

I was deployed on a brigade ‘main effort’ to conduct recces of several routes to enable the building of 2 new partnered checkpoint locations.

It’s fulfilling doing a recce role on operations as I feel like I’m testing all my learning from training and get to be part of an effort to make a real difference.

Email ThisBlogThis!Share to TwitterShare to FacebookShare to Pinterest
Labels: British Military and Women