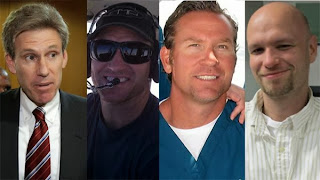 This past weekend, The New York Times ran an article - supposedly based on a year of investigation - which in effect attempts to perpetuate the lies which have been the administration's chosen narrative for the terrible events of September 11, 2012.

The fact of the matter is, NObody is buying any of the lame denials that continue, and the condemnation of this latest crap were swift in coming.

A former analyst for the CIA skewered the New York Times’ bombshell report on Benghazi Saturday, contending that it was a “politicized article” aimed at harming the GOP.


“I thought it was a politicized article,” Fred Fleitz told Fox News. “It tries to say that Anwar al-Sharia — that the Republican attempts to tie that to terrorism is a stretch, when even CNN says they’re at least sympathetic to Al Qaeda.”

Fleitz, who worked as a senior analyst at the CIA for nearly two decades before serving in the State Department, added that he thought the article was simply “an effort to revive this discredited theory that the anti-Islam video was behind” the deadly attacks.

“I read this report and I was really incredulous,” he said....

He is not the only one incredulous at this blatant avoidance of what is obvious to anybody with half a brain cell.

From Fox, 'Congressman Trey Gowdy (R-S.C.) ripped the New York Times for its recent report by David Kirkpatrick that al Qaeda was not a principal player in the 9/11/12 attack on the U.S. Consulate in Benghazi, Libya.'

As always, Gowdy cuts through the bs, and 'debunks the mythology.'.  Be sure to go watch the video of Gowdy doing what he does best.

PALM BEACH GARDENS, Fla., December 30, 2013 — The story of what happened that night when Americans were abandoned in Benghazi to die will not go away. Despite the appearance of Susan Rice on 60 Minutes two weeks ago, and a New York Times article yesterday reviving the fable that a video was to blame, disturbing questions remain.

As always, our Veterans weigh in.  Go read This Ain't Hell (including the comments.)

Hillary Clinton and her advocates in the media are busy trying to muddle what actually happened in Benghazi, including the decision at Hillary’s State Department to ignore warnings of a deteriorating security situation, and the failure of the Obama Administration to respond competently to the attack as it unfolded. So let’s get the record straight.

First, Ambassador Chris Stevens, DCM Gregory Hicks and the Diplomatic Security Officers repeatedly and accurately noted that the security situation in Libya, in general, and Benghazi, in particular, was growing more dangerous.

This was not an “intelligence” failure. The intelligence correctly noted a worsening threat. It was a policy and leadership failure. The ultimate responsibility for this belongs to Hillary Clinton and Under Secretary Patrick Kennedy. Unfortunately, the Accountability Review Board (which was chaired by Ambassador Thomas Pickering) was appointed by Hillary, supervised by Patrick Kennedy. Pickering and company decided to not interview Hillary Clinton as part of their bogus investigation. But they did affix blame on Ambassador Chris Stevens for not kicking Washington in the testicles for failing to respond to their repeated requests for more security:


There is much more, and it is a must read.

As if all that is not enough, comes this:

Fifteen months after the Sept. 11 attack in Benghazi which killed Ambassador Chris Stevens and three other Americans, the narrative of the attack continues to be shaped, and reshaped, by politicians and the press.

But a New York Times report published over the weekend has angered sources who were on the ground that night. Those sources, who continue to face threats of losing their jobs, sharply challenged the Times’ findings that there was no involvement from Al Qaeda or any other international terror group and that an anti-Islam film played a role in inciting the initial wave of attacks.


Imagine that, a witness disproving the lies.  Find the rest here.


As noted, the NYT would have us all believe that this latest of theirs took over a year to write, because they were investigating,   However, via Twitchy, they are also now claiming:

NYT: ‘We had a reporter on the scene talking to the attackers during the [Benghazi] attack’; Updated

NYT reporter says NYT knows who Benghazi attackers are > @ddknyt: we had a reporter on the scene talking to the attackers during the attack

The condemnation of  the obvious whitewash of the events in Benghazi appears to be just about universal.  Take a look at Aaron Klein, who says:


An extensive New York Times investigation into the Sept. 11, 2012, Benghazi attack is filled with misleading information, including details contradicted by the U.S. government, Benghazi victims and numerous other previous news reports. - ...

Remember Hillary's "What difference does it make' statement?  At the end of that clip she says about the only truthful part of her whole testimony:  'It is our job to figure out what happened, and make sure it doesn't happen again'...


You got that right, although I am not sure she meant those words the way I hear them.  I am confident that, no matter how long it takes, we WILL have the truth.


As Gowdy said back in May (captured for all time on video): There is no statute of limitations when it comes to finding out the truth.

Email ThisBlogThis!Share to TwitterShare to FacebookShare to Pinterest
Labels: Benghazi and NYT