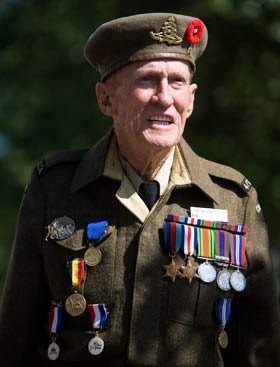 Canadian Second World War veteran Sam Wormington, 88, shows his medals in Caen, France, on Thursday, prior to the start of ceremonies marking the 65th anniversary of the D-Day landings and the Battle of Normandy. (Sean Kilpatrick/Canadian Press) British paratroopers from the 3rd Parachute Battalion land in a wheat field outside the village of Ranville, western France, Friday, as troops re-enact part of the bloody Allied landings of D-Day. (Francois Mori/Associated Press)A monument commemorating the role of the Royal Canadian Navy in the Allies' success on the beaches of Normandy in June 1944 was unveiled Friday in France.

The statue and plaque were unveiled in a ceremony held at the Juno Beach Centre in Courseulles-sur-Mer.

This year's D-Day ceremonies mark the 65th anniversary of more than 130,000 Allied troops storming the beaches of Normandy on the morning of June 6, 1944, a turning point that led to the defeat of Germany in the Second World War.

The success at the beaches along the Normandy coast couldn't have been achieved without the support of the Canadian navy, Canadian historian Jack Granatstein said.

The Germans had fortified the coast of northern France as part of their Atlantic wall, Granatstein said.

"It was a fortress of obstacles, mines and protected by shell fire. Every landing craft that went ashore had to dodge obstacles, carrying troops, picking their way as best they could through mines and hedge rows that were designed to put holes in their ships," he said.

Canada had one of the largest navies in the world during the Second World War, with more than 106,000 young men and women serving...

This is a great article, so go read it here. (And yes, I'll have more tomorrow).