Another hero - another runner: 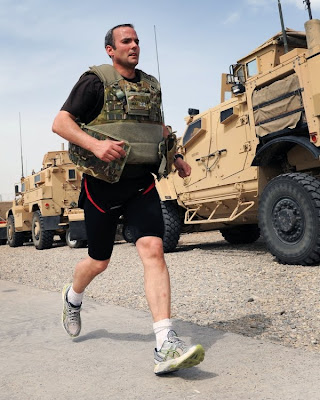 
A soldier who was told that he would never be able to run again will this Sunday attempt to run a marathon – in Afghanistan.

As thousands of people take to the streets of London, Major Al Jarvis is planning to run 26.2 miles around the camp in Helmand province where he is serving a six month tour. Despite temperatures above 30 degrees, Al will run the course wearing his full body armour which weighs 13 kilos. Quite a feat for anyone but especially for Al as it comes just three years after he broke his back in a parachute accident. He also fractured his left hip and right ankle.

The 37 year old was taking part in a training exercise in America but landed awkwardly, almost severing his spinal chord. He spent a week not being able to move at all but then doctors decided to operate to try and repair the damage. Surgeons spent hours removing two shattered discs and inserting two metal rods and ten screws into Al’s back. He was then flown back to the UK to continue his recovery but the outlook was far from hopeful.

He says it was a dark time:

“They hoped that the surgery would strengthen my back enough to allow me to walk but I should be prepared to leave the Army because I would never be able to return to the fitness levels I had before the accident.”

With the support of his wife Alyssa, Al went through months of intensive physiotherapy and treatment – defying doctors with his determination and resolve. He admits there were times it would have been easier to give up:

“It was the hardest thing I’ve had to do – physically and mentally. But thinking I would never being able to play football with my children was enough to give me the energy I needed to do that little bit more.”...

You just know there is much more (including a video clip) so go read it here.