It is with sadness that the Ministry of Defence must confirm that Corporal Andrew Steven Roberts and Private Ratu Manasa Silibaravi, both of 23 Pioneer Regiment, The Royal Logistic Corps, were killed in Afghanistan on Friday 4 May 2012. 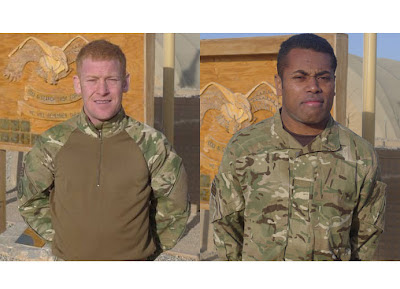 Corporal Roberts and Private Silibaravi were attached to 1st Battalion The Royal Welsh Battlegroup, serving as part of Combined Force Burma, when they were killed in an indirect fire attack on Forward Operating Base Ouellette, in the northern part of Nahr-e Saraj district.

Secretary of State for Defence, Philip Hammond, said:
"It was with great sadness that I learned of the deaths of Corporal Andrew Roberts and Private Ratu Silibaravi, two soldiers who were respected by their colleagues as much for their personalities as for their professionalism and commitment to duty.

"They have given their lives defending the UK’s national security in a campaign vital to preventing terrorism from succeeding and spreading; their sacrifice will not be forgotten. My thoughts and deepest sympathies are with the two families, as well as friends and colleagues left behind."

Corporal Roberts' Advanced Search Team had completed in-theatre Role Specific Training before assisting in coaching other teams undergoing this training. On 18 April 2012, Corporal Roberts deployed in support of the 1st Battalion The Royal Welsh to the Nahr-e-Saraj district of Helmand province.

Whilst there, Corporal Roberts' team conducted a number of search operations to clear irrigation ditches and enhance the security of operating bases as well as deploying to provide direct Counter Improvised Explosive Device support to British patrols.
In leading his team in this role, Corporal Roberts not only facilitated freedom of movement for International Security Assistance Forces and Afghan National Security Forces, but also undoubtedly saved the lives of both Afghans and International personnel.

Corporal Roberts was 32 years old and was born in Middlesbrough. He joined the Army in 1998 and had been serving as a Section Commander in 23 Pioneer Regiment The Royal Logistic Corps based in Bicester, Oxfordshire since 2008. He had served on operations in Bosnia and Iraq and this was his second tour of Afghanistan.

He was a very able and plucky sportsman and a highly regarded physical training instructor. He will always be remembered for his trenchant efforts in the Regimental boxing ring and his enthusiastic Squadron PT sessions. He was a 'larger than life' character and extremely well known in the Regiment; his loss will cast a long shadow.

"For our brave Dad who went away to build sand castles and stop the bad men hurting people. We love you to the moon and back. You are an angel in Heaven now looking down on us all, we wish yesterday had never happened and you were still here to phone us and take us out. You were the best Dad, we remember all the fun things we did, we will never forget you and will love you forever. You are our Hero and we will pray for you always."...

On 18 April 2012 Private Silibaravi was deployed in support of 1st Battalion The Royal Welsh to the Nahr-e-Saraj district of Helmand province. His team had conducted a number of search operations to clear irrigation ditches and enhance the security of operating bases, as well as deploying to provide direct Counter Improvised Explosive Device support to patrolling troops.

Private Silibaravi was 32 years old and was born in Fiji. He joined the British Army in 2002 and in 2003 he took up his post in 23 Pioneer Regiment The Royal Logistic Corps based in Bicester, Oxfordshire. During a relatively short, yet busy career in the Army, Private Silibaravi had served in Iraq in 2003 and Afghanistan in 2006 and 2009.

He has served in 23 Pioneer Regiment RLC and the Support Battalion, Headquarters Allied Rapid Reaction Corps. He also completed public duties at Windsor Castle, Buckingham Palace, St James's Palace and the Tower of London in 2008. His enthusiasm and intelligence made him an ideal member of an Advanced Search Team

A consummate sportsman he was a member of the Regimental Rugby Team and was a promising candidate for the Royal Logistic Corps Rugby Team. He was a fine runner and represented the Regiment at athletics.

A popular Pioneer, Private Silibaravi leaves behind his brothers, Saimoni, Kaveri and Ratumeli, and sisters, Mereoni, Salote and extended family.

"The terrible loss of Private Silibaravi has come as a shock to all of us in the Explosive Ordnance Disposal and Search Task Force and I know that it will affect his parent unit, 23 Pioneer Regiment The Royal Logistic Corps in a similar manner. At this most difficult of times my thoughts and heartfelt condolences are with his family and all of his friends.

"A quiet, yet determined and popular soldier, Private Silibaravi was a professional and committed individual. Strong and fit, he had an excellent work ethic, throwing himself wholeheartedly at every challenge. The number of operational tours that he had successfully completed is testament to his dedication and professionalism....


Much more about the lives of these two Fallen Heroes, from those who know and love them the most.

Go here and spend the time.