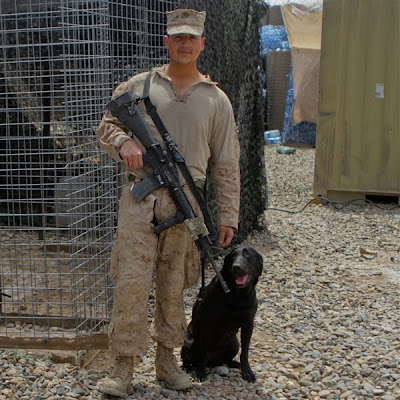 TREK NAWA, Afghanistan, May 2, 2012 – Many children beg their parents for a dog. The floppy ears and wagging tail seem to attract children to man’s best friend. But many parents know that caring for a dog means a lot of responsibility, training and effort.

Dog handlers in the Marine Corps not only shoulder that same responsibility — they volunteer for it on top of the responsibilities of being deployed to Afghanistan.

Rodriguez said he loves being a dog handler. He knows he’s helping his squad, and the added responsibilities far outweigh the added attention of caring for a dog.

What sets Rodriguez apart from other dog handlers is the personal effort he puts into Dharma, a 4-year-old Labrador retriever.

Rodriguez, a native of Fayetteville, Ga., knows that a dog handler’s job is more than just patrolling with and feeding the dog. The most important job is ensuring the dog is well prepared for the deployment ahead....