America: Vote today - Because they can't

Today is voting day in the USA and the world is watching.

It is no secret that I am not American, so in theory I have no say in the outcome - not my business. However, it is also no secret that I am an avid watcher of all things political with my neighbour to the south, and yes, my regular readers know I have very definite opinions.

I was going to write a long, detailed piece here about what is at stake as Americans go to the polls across the land, and talk about the issues that matter; issues that WILL be decided today.

Then I saw a Gold Star Mother write "Vote on Tuesday - because they can't."

Seeing that clarified for me what this election is about.  Yes, it is about the economy, for sure, and yes, it is about our Military, no question.  Voters today will determine the Supreme Court of the US for years to come.  What happens with America's energy policy is also on the line with every vote. Unless voters have been asleep, they have to know that their vote will determine the foreign policy of America, and America's place on the world stage....

Bottom line:  this election is about vision.   One of the things that has become crystal clear to me during this most recent frenzy that passes for a campaign is the difference between what the Democrats and the Republicans see as the future of America.

In the last couple of days I have heard the president say "your vote is your revenge....work for me...(yes, emphasis mine) etc etc..."  and heard the Republican contender tell Americans "vote for love of country..."

I could go issue by issue and discuss the glaring differences between each party's approach to solutions, but frankly?  If American voters still need that discussion today - they have no business voting, since they have chosen to remain woefully uninformed.

Fact is - when Americans cast their votes today, it will be a momentous decision.  As Ronald Reagan so rightly said long ago:  it really IS "A Time for Choosing.

Our Fallen Heroes chose to serve America by enlisting in the Military.  Their choices, their sacrifices,  were in support of the freedom so many Americans take for granted.  They shed their blood, gave their lives in countries for whom democracy was a new concept...

In Iraq, in Afghanistan, our Troops have bled - and sacrificed their lives - to ensure free and fair democratic elections in those countries.

Today is America's turn to choose the course of this great nation.

Our Fallen Heroes answered the question posed by JFK decades ago:


Today, every American has the opportunity to choose the shape of their democracy for tomorrow.

Our Fallen Heroes gave their tomorrows.  America owes them nothing less than our vote to ensure the survival of the vision that makes America great - the America our Fallen Heroes swore an oath to protect. 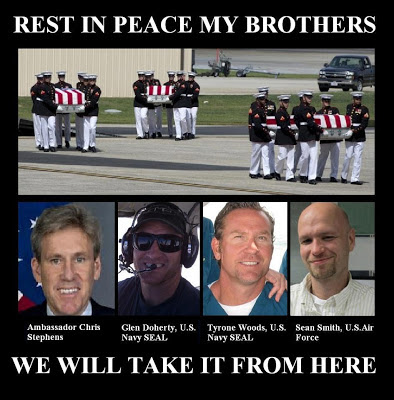 Brave men and women have fought and died so that Americans have the right to vote. On November 6, 2012 go and vote - and when you do - remember those brave Americans like Navy SEAL Aaron Vaughn, and silently thank him and his comrades for defending this nation and our freedom.

God Bless America as you vote today.   Because they can't.
Posted by The Brat at 4:37 AM

Email ThisBlogThis!Share to TwitterShare to FacebookShare to Pinterest
Labels: Election Day US 2012