Some Gave All: Lt Edward Drummond-Baxter and LCpl Siddhanta Kunwar 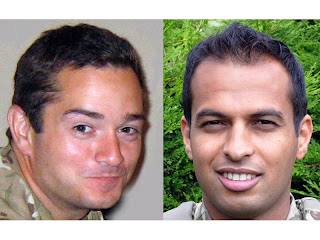 It is with great sadness that the Ministry of Defence must confirm that Lieutenant Edward Drummond-Baxter and Lance Corporal Siddhanta Kunwar, both from 1st Battalion The Royal Gurkha Rifles, were killed in Afghanistan on Tuesday 30 October 2012.

Lieutenant Drummond-Baxter and Lance Corporal Kunwar were based in Checkpoint Prrang in the southern area of the Nahr-e Saraj district of Helmand province. Both men were attached to 40 Commando Royal Marines.


On 30 October they were participating in a shura (meeting) with members of the Afghan Uniform Police inside the checkpoint.


On completion of the shura, they were shot and killed by a man wearing an Afghan police uniform who had been attending the meeting.


Lieutenant Edward Drummond-Baxter deployed to Afghanistan on 30 September 2012 as Platoon Command of 1 Platoon, A (Delhi) Company, 1st Battalion The Royal Gurkha Rifles (1 RGR), attached to 40 Commando Royal Marines as part of Transition Support Unit Nahr-e Saraj. He was based in Checkpoint Prrang in the southern part of Nahr-e Saraj District, Helmand province. He was on his first operational tour of Afghanistan.


Lieutenant Drummond-Baxter was born in Peterborough on 15 September 1983 and lived in County Durham with his parents. He studied at University College London and gained a BSc degree in Psychology. While at university he was an active member of his local Army Reserves regiment, The Honourable Artillery Company.


He subsequently spent two years working for the Foreign and Commonwealth Office including a posting to Japan before joining the British Army. He attended the Royal Military Academy Sandhurst in 2010 and commissioned into 1st Battalion The Royal Gurkha Rifles in December 2010.


After Sandhurst, he completed the demanding training to qualify as an Infantry Platoon Commander and further cemented his ability as an outstanding field soldier by passing the arduous Jungle Warfare Course in Brunei to qualify as Jungle Operations Instructor.


Throughout 2011 and 2012 he expertly prepared and led his platoon through the detailed mission-specific training for Operation HERRICK 17 in Afghanistan and attended the three-month Nepali language course in Pokhara, Nepal. In August 2012, he volunteered to spend a further month in Nepal assisting with the Brigade of Gurkhas' selection course.


Lieutenant Drummond-Baxter was an excellent Platoon Commander whose calm demeanour and ready sense of humour were widely respected by his soldiers and fellow officers. He quickly made his mark as a talented officer who possessed great potential and always put his soldiers first.


He leaves behind his mother, Helen, father, David and sister, Emily.

"Edward was fiercely loyal and totally sincere to his parents, sister and many friends who are mourning him today both in the UK and around the world. He loved the Gurkhas and died among friends doing the job that he wanted to do. Helen and David would appreciate being left to grieve in private."


Lance Corporal Siddhanta Kunwar deployed to Afghanistan on 3 October 2012 as a Sniper Section Commander in the acting rank of Lance Corporal. He was serving with A (Delhi) Company, 1st Battalion The Royal Gurkha Rifles, attached to 40 Commando Royal Marines as part of Transition Support Unit Nahr-e Saraj. He was based in Checkpoint Prrang in the southern part of Nahr-e Saraj District, Helmand province. He was on his third operational tour of Afghanistan.


Lance Corporal Siddhanta was born on 19 June 1984 in Pokhara, Nepal, where he lived with his mother and father. He passed the arduous selection for the Brigade of Gurkhas on 17 December 2004 and having completed his year-long infantry training joined 1st Battalion The Royal Gurkha Rifles in October 2005.
Very soon after his arrival in 1 RGR he deployed with the Battalion to Bosnia-Herzegovina in 2005-2006 as part of the European Union Force in support of the Bosnian Government. Lance Corporal Siddhanta then moved with 1 RGR to Brunei where he conducted extensive jungle training and qualified as a sniper in 2007.
In late 2007 and into 2008 he deployed to Afghanistan on Operation Herrick 7 where he served in Garmsir in southern Helmand Province. In 2009 he successfully passed a Junior NCO selection course and in 2010 returned to Afghanistan with 1 RGR on Operation HERRICK 12 to the Nahr-e Saraj area of Helmand province. It was during this tour more than ever that his calm good humour, sharp mind and huge operational experience became a touchstone for his fellow soldiers.


LCpl Siddhanta Kunwar was an outstanding soldier and a true Gurkha. He displayed the calmness of mind, cheerfulness in adversity and loyalty throughout his many operational tours - qualities that the Brigade of Gurkhas hold dear. He served with many of the Companies within the Battalion and his loss will be deeply felt throughout 1 RGR.

"We are deeply shocked, disheartened and in disbelief that Siddhanta is no longer with us But we shall treasure all the good things he did. He enjoyed immensely of his profession and was fully committed towards it. He has made us proud. The whole family misses him dearly."...


Go here to learn more about the lives of these Fallen Warriors.