British Heroes honoured for their courage

From the Daily Express:

THE courage of Britain’s forces was honoured by the Queen yesterday at a special ceremony at Buckingham Palace. 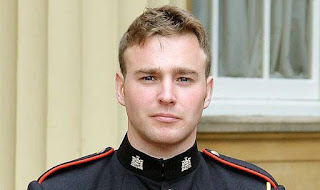 Lance Corporal Lawrence Kayser, 27, who single-handedly fought off enemy fighters in Afghanistan, said he was overwhelmed to receive the Military Cross and wanted to dedicate it to his whole battalion.

L/Cpl Kayser, of Mill Hill, north London, was one of four serving soldiers from The 1st Battalion The Royal Anglian Regiment who were recognised for their bravery. A fifth award was made posthumously.

Corporal Alexander Guy, 37, was killed going to the aid of Afghan soldiers ambushed in Helmand province in June last year.

His wife Emma received the Military Cross on his behalf, accompanied by his parents Aileen and Andrew and an uncle, Alec Wilson.

“We are so proud of Alex today and we’ve had wonderful support from the regiment,” they said.

Cpl Guy, from St Neots, Cambridgeshire, had been in the Army for 19 years, serving on eight tours of duty....

Go read more on the bravery of Fallen Hero Corporal Guy and his brothers in arms, here.