TSA and knives on board

In case you missed this reversal, from the BBC comes this on passengers being allowed - once again -  to take knives on board US flights: 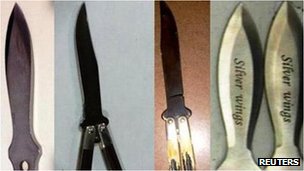 
The US transport safety authority has cancelled a plan to allow some small pocket knives aboard US flights for the first time since the 9/11 attacks.


He had said the change would allow screeners to focus on other threats.


He initially proposed allowing passengers to bring blades shorter than 2.36in (6cm) and narrower than 0.5in into plane cabins.


Also under the proposed changes, billiard cues, ski poles, and lacrosse and hockey sticks would have been allowed in the flight cabins in carry-on luggage....

Email ThisBlogThis!Share to TwitterShare to FacebookShare to Pinterest
Labels: TSA and knives