"They are slaughtering us like chickens": Thousands of Christians in Central African Republic flee Muslim attackers

Nigeria, Egypt, Syria, Pakistan, Indonesia, the Central African Republic: the Muslim persecution of Christians has attained global proportions while the world wrings its hands over "Islamophobia."


BANGUI, Central African Republic (AP) — Thousands of Christian civilians sought refuge at an airport guarded by French soldiers Friday, fleeing from the mostly Muslim ex-rebels with machetes and guns who rule the country a day after the worst violence to hit the chaotic capital in nine months. When several French helicopters landed at the airport, people sang with joy as they banged on plastic buckets and waved rags into the air in celebration.

Outside the barbed wire fences of the airport, bodies lay decomposing along the roads in a capital too dangerous for many to collect the corpses. Thursday's clashes left at least 280 dead, according to national radio, and have raised fears that waves of retaliatory attacks could soon follow.

"They are slaughtering us like chickens," said Appolinaire Donoboy, a Christian whose family remained in hiding....


Read more here.  From around the world come daily reports of Christians being murdered by 'peace-loving' practitioners of Islam.

I have wondered often why the Obama administration has remained silent, and not publicly denounced such barbarism. Quite apart from giving Muslim Brotherhood groups billions of dollars in aid, the simple answer may be found here:

Mohamed Elibiary, a senior Dept. of Homeland Security advisor, tweeted that America is "an Islamic country." 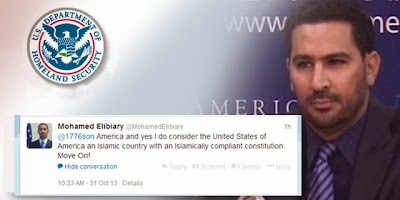 A senior advisor to the Department of Homeland Security, Mohamed Elibiary, says that America is “an Islamic country” and continues to argue that the Muslim Brotherhood is comparable to Christian evangelicals.

Yes, there is more, with screenshots, here.