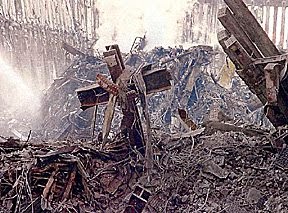 
Today is the official opening of the 9/11 Museum and I have no doubt at all that there will be politicians front and center  - aided and abetted by the msm -bleating all their meaningless blather, with the usual little regard for the people who were there and so directly impacted by that horrific day. 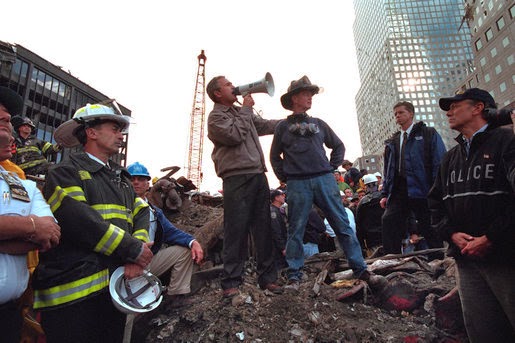 (The only relevant politician from that day)


Today, as then, for me the majority of the politicians are irrelevant.  Over the years since September 11, 2001  I have watched with outrage and disgust as politicians of all stripes have dishonoured those who gave their lives on that day:  The First Responders.  I have paid attention as the msm has by and large ignored the terrible human  price paid, and only remembered the family survivors when it fits the agenda of some faceless media executive.  Yes, there has been more than a few *stories* by the msm leading up to this day ( Inside Look at the 9/11 Museum   and from Stars and Stripes: Haunting 9/11 museum echoes sights and sounds of tragedy )  but I can pretty much guarantee that by this time next week, the major media will have moved on to the next *big story*, with little regard to those 9/11 Survivors who will live every day for the rest of their lives with what they saw, and who they lost on the day Islamist terrorism struck at the heart of America.

Today, as then, it is the individual Heroes and those they left behind - those who avoid the media -  who are, for me,  The Heart of the Matter.

All across America - and yes, around the world - are many from small towns, big cities who have a never-to-be-severed  connection to what is inside that Museum. More than a few I know and love have mementos of their loved ones' lives now forever enshrined in the 9/11 Museum. 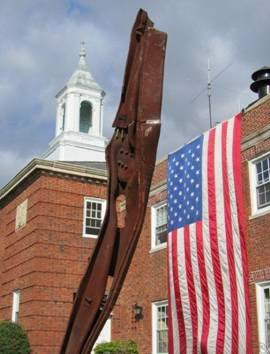 This picture was taken on a glorious sunny day in September of this year. I was there the week of 9/11/11 when this was first installed. The day this picture was taken, passersby were stopping to ask what it is, what it means. This steel arrived in the Village of Floral Park in April of this year. You can find pictures of that day on the Floral Park Fire Department page here.

It is steel from the World Trade Center, the target of terrorists on 9/11/2001. That attack was IN New York, in America, but just as the reverberations of that murderous attack were felt around the world, so, too, is the steel that remains installed in Memorials around the world. It is also an integral part of the USS New York.


Today is the dedication of this Memorial in Floral Park, and the people of this small town America will stand in solemn ceremony to honour and remember their own who gave their all on that terrible day. Just as on the day the above picture was taken - when parents were explaining to their children the significance of this Memorial - so now it stands for all time. Future generations of residents of this small town America will pause and reflect on a day that changed our world forever....

Today, as on 9/11/2001, and at the ceremonies I was privileged to attend on the 10th anniversary, I am thinking about those precious souls we lost on that day when Islamist terrorists declared war on innocents.

On September 11, 2001, I sat in front of my television 3,000 miles away from Ground Zero as the msm talking heads tried to make some sense of the horrific images they kept repeating, over and over. I cried a lot that day and in the ensuing weeks even though, on the surface of the matter, I was far removed from the horrors of that day....(here)

Today, as then, my heart knows no geographical boundaries as I quietly remember and honour the enormous sacrifices made that day by Heroes, and by many other Heroes in the years since in this Global War On Terror.

So yes, today, even as I am still crying and my heart still hurts,  I am as committed as ever to remembering and honouring every single one of our "ordinary people who do extraordinary things" and survive in the face of evil. 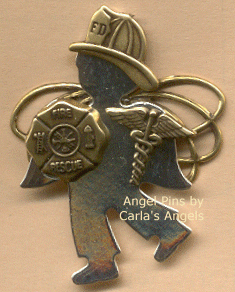 Thank you for this . I think you should publish it in the paper up there. :)