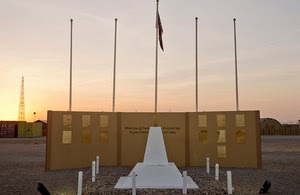 The memorial bears the names of all 453 UK personnel who have died on operations in Afghanistan and has been the focus for commemoration and reflection since it was erected.

Following the vigil ceremony last weekend it will be transported to the National Memorial Arboretum as the drawdown of UK combat operations nears its conclusion.

In a speech at the ceremony Brigadier Rob Thomson, the most senior UK military officer in Helmand province and Deputy Commander of Regional Command (Southwest), reflected on the sacrifice of British troops and those of other nations....


There is much more about this Memorial, and pictures of the ceremony, here.

There is a great series of (copyrighted) pictures of some of the last UK Troops leaving Helmand, at  The Sun (UK).