Anjem Choudary proves he is still a scourge

For years, Anjem Choudary has been flapping his jaws on the streets of England, (and more recently on Hannity of US tv) insisting that sharia law WILL be the law that governs all of our western countries.

His latest verbal diarrhea?  Read on.

Anjem Choudary: I Don't Feel Sorry for Those Beheaded


'If they arrest me and put me in prison,' Choudary has said, 'I will carry on in prison. I will radicalize everyone in prison.' 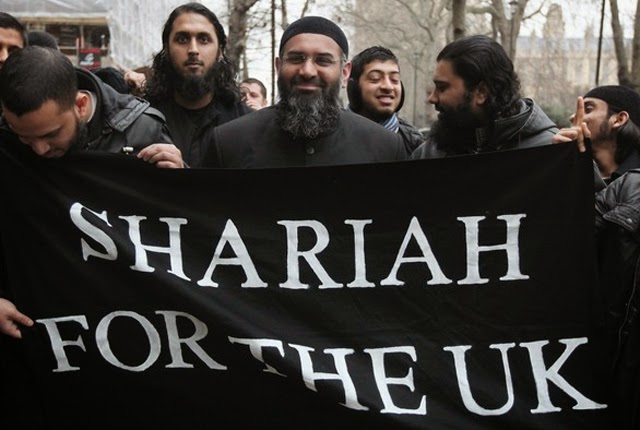 The British Islamist firebrand Anjem Choudary has been released from police custody after he was arrested for allegedly being a member of a banned terrorist group.


Choudary and nine other radical Muslims were detained during dawn raids in London on September 25 as part of an ongoing Metropolitan Police investigation into Islamist-related terrorism.

Choudary—one of the most high-profile jihadists in the United Kingdom, and well known for his relentless resolve to implement Islamic Sharia law there—is a former spokesman of the Muslim extremist group, al-Muhajiroun (Arabic: The Emigrants).

Al-Muhajiroun—which repeatedly celebrated the terrorist attacks on the United States in September 2001—wasbanned under the UK Terrorism Act 2000, in January 2010.

Since then, al-Muhajiroun has repeatedly reinvented itself under an array of successor aliases. These include, among others: Islam4UK, Call to Submission, Islamic Path, Islamic Dawa Association, London School of Sharia, Muslims Against Crusades and Need4Khalifah, all of which have also been proscribed.

Al-Muhajiroun—founded by Choudary and the exiled preacher, Omar Bakri Mohammed—is said to have also played a major role in radicalizing Michael Adebolajo, who was found guilty of murdering (and attempting to decapitate) the British soldier Lee Rigby outside London's Woolwich Barracks in May 2013.

Choudary said Rigby would "burn in hellfire" as a non-Muslim, and also praised Adebolajo as a "martyr." He said:

PAY ATTENTION.
Posted by The Brat at 3:35 AM