AFG 'Terp gets permission to settle in UK - finally

We have written here a few times of the disgraceful treatment of Afghans who risked their lives daily to work with our Troops, only to be left in harm's way when our Troops officially 'left'  the sandbox.  Broken promises have been the order of the day for a few years, as our governments (UK, Canadian and US) desert these brave locals as they try to stay one step ahead of the Terrorists who are intent on murdering them and their families.

Today, out of England, comes the story of ONE such Afghan 'terp who apparently is now being given permission to settle himself and his family in the UK.

More than 200 interpreters who worked on frontline now live under threat
Taliban threatened to kill 'Sam' and family, and already murdered brother 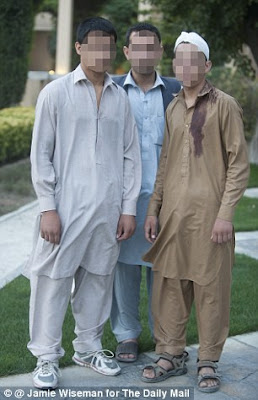 A former Afghan translator and his family targeted by Taliban assassins have been granted sanctuary in Britain in a major victory for the Daily Mail’s Betrayal Of The Brave campaign.


The 28-year-old interpreter known as Sam has been told that he should be allowed to come to the UK together with ten members of his family who are also threatened because of his work on the frontline for the British Army.


The unprecedented decision comes seven weeks after the Mail revealed how one of Sam’s brothers, 22-year-old Parwiz, who was also a translator for UK forces, was murdered by the Taliban on the doorstep of the family home.


The family moved to the Afghan capital Kabul but, two weeks later, Taliban gunmen tracked them down. Sam, who spent 18 months in Helmand with UK forces, was not at home so they tried to kidnap two more of his brothers at gunpoint. The pair, aged 17 and 14, escaped but were badly beaten, one needing eight stitches in a head wound.

A defence source said: ‘Investigations found Sam and his family to be under sufficient threat.’ The application has been sent to the Home Office for security checks and for final confirmation.


Last night former translators hailed the decision as a victory both for ‘decency’ and the Mail’s campaign, which highlighted the plight of interpreters claiming they have been abandoned to the Taliban by the UK Government....

This IS a good start but comes nowhere near the governments fulfilling their promises to these brave locals.  All of the 'Terps have more than earned our loyalty by THEIR loyalty to us.