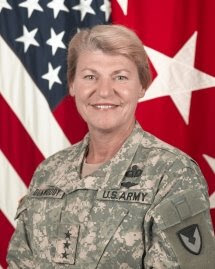 Army Chief of Staff Gen. George W. Casey Jr. will preside over the ceremony, which will include a 17-gun salute, the AMC Band and the AMC ceremonial color guard.

Dunwoody will be promoted as the first woman four-star general in the U.S. military in a ceremony at the Pentagon earlier in the day....(read more here).
Posted by The Brat at 1:07 AM