Cross-posted by Maggie at Maggie's Notebook 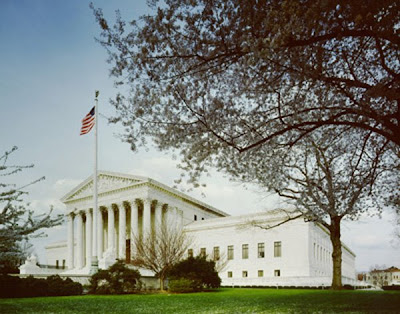 Most of us think what the Supreme Court does is news worthy. Not the case at RCP. The question is: why does RCP not deem actions by the U.S. Supreme Court important for readers to know about?

PLEASE, if you have not posted about this already, grab this and cross-post at your blog. Let's get the information out and send some letters to the Supreme Court.

*****
Justice Clarence Thomas has placed a discussion of Barack Obama's citizenship on the December 5th docket for conference, meaning a discussion of the merit of this particular case.

A commenter at America's Right, who has been the leading source of excellent information on the various lawsuits, is requesting that we write directly to the Supreme Court:

Ask him UPHOLD our Constitution with Full Disclosure as the only Constitutionally viable answer.

One commenter said he/she was sending a copy of his letter to each of the nine Justices. Good idea!

Here are some details just in from WorldNetDaily

The Supreme Court's website listed the date for the case brought by Leo C. Donofrio against Nina Wells, the Secretary of State in New Jersey, over not only Obama's name on the 2008 election ballot but those of two others, Sen. John McCain and Roger Calero.

The case, unsuccessful at the state level, had been submitted to Justice David Souter, who rejected it. The case then was resubmitted to Justice Clarence Thomas. The next line on the court's docket says: "DISTRIBUTED for Conference of December 5, 2008."

As for New Jersey firebrand and attorney Leo Donofrio, his application for an emergency stay was denied by Justice Souter, Donofrio was able to refile and resubmit it to the Justice of his choosing, and properly did so. Today, the docket for his action shows that after being put before Justice Clarence Thomas, the application will be discussed by the Court in a December 5, 2008 conference.

Normally, during their term, the Supreme Court Justices conference on Wednesday (typically, but not always) and review the various petitions and applications before them, deciding which of the many such proceedings should be heard by the Court. I suspect that we could soon see a similar entry on the docket for Berg's case as well.

Now, this does not mean that the Court has decided to hear either of these matters and, in fact, is fairly typical when it comes to the process. Still, for those hoping to have these cases heard on their merits, for those who feel these issues are more about the United States Constitution than Barack Obama, this is a step in the right direction.

Please visit America's Right and WorldNetDaily for more.
Posted by The Brat at 7:36 PM