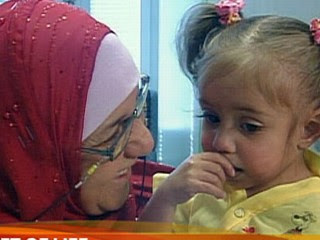 Doctors in Iraq never expected Amenah to make it past age three, but when a group of U.S. Marines noticed the sick little girl, they arranged for her to get treatment in America.
(ABC News)

Thousands of miles and countless cultural differences separate Iraq from Nashville, Tenn., but all it took was the small broken heart of a two-year-old Iraqi girl to bring the two locales together.

This week — with a copy of the Koran and a small guardian angel tucked beside her on the operating table — a little girl named Amenah underwent life-saving, open-heart surgery.

"It was clear she was in a dire situation and she was showing signs and symptoms that, if left untreated, she was not going to live much longer," said Dr. Thomas Doyle, of Vanderbilt Children's Hospital, where the girl was treated.

But Amenah's story begins long before her successful operation. It started in the Iraqi desert when Iraqi doctors told her mother she had little chance of surviving past age three.

Amenah was born with a large hole in her heart and a severe obstruction between her heart and lungs. Her circulation was so poor that her lips, fingers and toes turned blue.

Then, last October a group of Marines on routine patrol noticed a little sick girl. That girl was Amenah....(the rest of this story is here.)

A couple of readers' comments struck a chord:

Once again, Marines have shown that we are not only warriers, but we also have kind and gentle hearts... This is instilled in our hearts from Day 1...It's very nice to read articles on the positive things our warriers are doing in Iraq and Afghanistan... I hope someone shows this article to the troops...I'm sure it will motivate them as it has motivated me... "Semper Fi"... Gunny01

Finally! Someone has the decency to report not only the bad but the good! There is so much good that has come out of the war overseas! So far the media has only told stories that make us (the military and America) look like murderes of innocent people. We have rescued that nation from so much horror and have created so many new wonderful things for that country to grow with! Most towns now have running utilities such as water and electricity! They have decent houses, schools and hospitals! Think about the positive things that we are trying to do overseas!