For the kids of our Fallen: Gate to Gate Run, ODA 7125's run for the SOWF, in Honor of Fallen SF Medic, SGT Timothy Padgett

On this last day of the officially designated Month of the Military Child, a reminder of an important event which supports the kids of our Fallen of the Special Ops:

via War On Terror News: 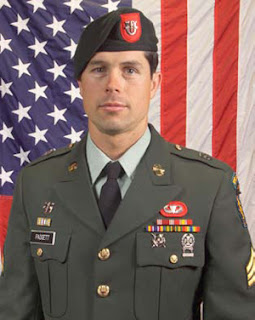 Of all the MOS's (jobs) in the military, the one I hold in greatest respect is probably an 18D, Special Forces Medic.  Those that graduate the SF Medic's course are capable of amazing feats of life saving trauma treatment.  As (more than) one person has described the role of the SF Medic:

"They can kill you and then save your life."


They don't wear the medic red cross, because theirs is a combat mission, with the job of keeping everybody alive and healthy.  On the range, you probably wouldn't know the difference between the 18D and his teammates, and ODA's (Operational Detachment Alpha) are the epitome of a team.  The things they can do aren't a matter of just physical brawn. It's intelligence, common sense, hard work, constant practice, dedication beyond perfection, but above and beyond all is teamwork.

So, it does not surprise me to find that team 7125, formerly known as 725, has adopted SGT Padgett's family as their own, or that they are going the extra 4.4 miles in Honor of him, and in support of the Special Operations Warrior Foundation.


I have rarely mentioned SOWF, but it is one of the most efficient Non-Profits in the Pro-Troop arena.  It specializes in ensuring that the children of fallen Special Operations Troops get a college education.  Funds donated to it make it to that cause at a percentage unprecedented in the Non-Profit world.  In short, they are good stewards of financial donations.


Though the team is currently deployed to Afghanistan, they are training and have a goal of being 1st and raising $10,000, in the 4.4 mile run at Eglin AFB in May.  They're running treadmills at a pace of 5:50 minute miles, which is frankly unreal to me, for an individual, much less a team.  And they plan to cut that time down before the race, and when they aren't in the middle of place where people are shooting at them.

In fact, it wasn't the team itself that contacted me about this, but the brother of a team member, because their duties still come first, defending America, in a far off land that has taken a Brother from them.

If you can find $5 or $500 to donate to a worthy cause, in the Honor of a Fallen Warrior, as supported by some of Our Nation's best, please donate here: http://www.indiegogo.com/projects/in-memory-our-fallen-hero-and-teammate

GO now and watch the video WOTN has up, and please if you can, donate a few dollars.  Check out the FaceBook page, too.

As I always say:  The children ALSO serve, and these kids have sacrificed so much.  Support them, please.
Posted by The Brat at 5:46 AM

Email ThisBlogThis!Share to TwitterShare to FacebookShare to Pinterest
Labels: Gate to Gate Run