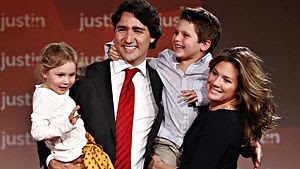 Justin Trudeau, his wife, Sophie Grégoire, son Xavier and daughter Ella-Grace celebrate after he was elected new leader of the Liberal Party with 80 per cent support in Ottawa on Sunday
((Christinne Muschi/Reuters))

The political landscape in Canada changed again yesterday as the Trudeau campaign machine saw the eldest son of late Prime Minister Pierre Trudeau garner 80% of the eligible votes to become leader of what is currently called the 'third party' on Canada's federal stage..

Newly elected Liberal Leader Justin Trudeau will face his first test when he appears in question period on Monday, after MPs return to Ottawa following a two-week stretch in their ridings.

All eyes will be on how well the young Trudeau, the eldest son of former prime minister Pierre Elliott Trudeau, performs against Prime Minister Stephen Harper, who is expected to be in the House. 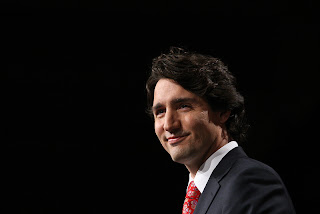 In an interview airing Sunday with CBC News anchor Peter Mansbridge, Trudeau said his first question to Harper would be about some of “the many concerns” that have come up during the course of the five-month leadership race.

Harper found himself tongue-tied when he referred to Trudeau as a “minister” rather the member from Papineau.

Trudeau conceded to Mansbridge that he was nervous because it was his first question to the prime minister, but quickly added that Harper's nervousness was “a source of some speculation and amusement.”...

AsTrudeau Part Deux  enters the next phase on the road to 24 Sussex Drive (Prime Minister of Canada,) politics in Canada once again got interesting.
Posted by The Brat at 4:38 AM