Out of GITMO comes word that there are 'clashes' between guards and detainees, as over 40 of them continue to stage a hunger strike. 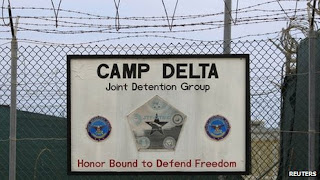 Prisoners and guards have clashed at Guantanamo Bay as authorities moved inmates, many of whom are on hunger strike, out of communal cellblocks.

The move came after detainees covered surveillance cameras and windows, a US Army spokesman said.

He said some prisoners used "improvised weapons" and in response "four less-than-lethal rounds" were fired.

The Pentagon says 43 prisoners are on hunger strike, but lawyers for the detainees say the number is higher.

Almost a dozen are being force-fed, according to military officials.

There were no "serious injuries to guards or detainees" in Saturday's clashes, according to Capt Robert Durand of the US military's Southern Command.

"I know for sure that one detainee was hit but the injuries were minor, just some bruises," another spokesman, Col Greg Julian, told the Associated Press.

Lawyers for some of the detainees condemned the camp authorities' actions....


The BBC has more here  - of course - on how *frustrated* the guests at GITMO are with the deplorable conditions (*cough cough*) and miserable lives these men lead in the Hilton of prisons.

Diane Fairben, mother of 9/11 EMT-P Keith Fairben, who lost his life that day:

These guards at GITMO are subjected daily to the most disgusting things thrown at them, and more. I am glad to read none of them were hurt, and no detainees either. The conditions they have are far better than US prisons. This country has made sure of that, and that they get US constitutional rights. Kind of wacky, considering none are US citizens.

Steven Crowder went to GITMO and released a video of the terrible conditions:

Take a look at the reality that IS GITMO:

Pretty damn torturous, huh? And for those who would still insist that the terrorists suffer all manner of deprivations and inhumane conditions in GITMO, Crowder has this:

Hunger strike as political theatre? If I had my way, these 'hunger strikers' would join Bobby Sands, but that's just me! Yeah, let them eat - or NOT!

Over at This Ain't Hell, the sad, whining of on e of the "dear, innocent" residents of GITMO is highlighted.  GO read.  It is to weep about the inhumanity.(well, no, not really.)

[Related,  from the DOD]

Thanks for writing this Brat...seems our main stream media fails to tell all about what goes on there...shocking...NOT

Wow What an eye opener! Not what I expected at all! Thank you for this- I posted it on FB.