Support the Troops - only on Friday?

Today is "Red Shirt Friday" and next week is Remembrance Day in the Commonwealth and Veterans Day in the US,  but what about every other day of the year? 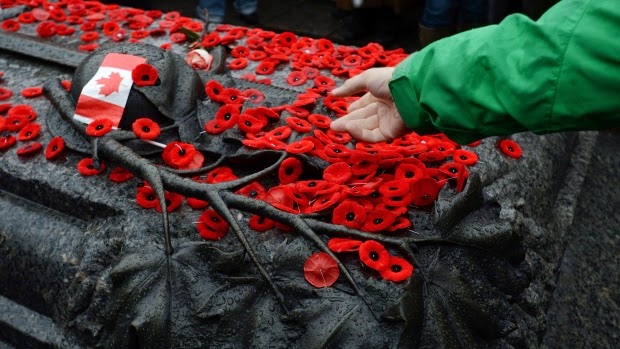 A poppy is placed on the Tomb of the Unknown Soldier following the Remembrance Day ceremony at the National War Memorial in Ottawa on Nov. 11, 2013. (Sean KilpatrickéThe Canadian Press)

Remembrance Day through the years
Red poppy, influenced by In Flanders Field, dates back to 1920By John Ward, The Canadian Press

It began as a visceral response to the terrible death toll of the First World War, but for Canadians, Remembrance Day has evolved into a tribute to all military dead and a celebration of the Canadian Forces in general.


The victory of 1918 came at a heavy cost. From a population of about 7.8 million, Canada had put about 620,000 men and women into uniform during the war. Almost 10 per cent were lost.


"With some 60,000 Canadians killed, the war produced a profound sense of loss in a country whose greatest military tragedy to date had been 267 dead in the South African War of 1899-1902," the Veterans Affairs Department says.


In 1919, there were calls for some sort of commemoration to mourn the dead and pay tribute to the hundreds of thousands who fought.

That year, King George V urged that people observe two minutes of silence at 11 a.m. local time across the Commonwealth and Empire....

Much more - with archived pictures - here.


Related:  Flanders' Field Memorial Garden opens
Posted by The Brat at 1:04 AM