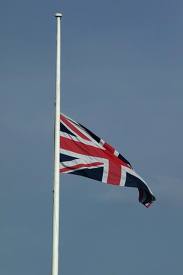 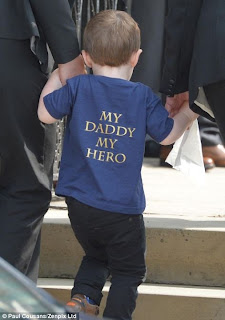 The son of Fusilier Lee Rigby arrived at his father's funeral today wearing a t-shirt that said: 'My Daddy, My Hero'.


Jack, Rigby two, arrived at the funeral wearing a blue t shirt with 'My Daddy's A Fusilier. Lee Rigby' printed on the front.


He was joined by hundreds of mourners at the service for the 25-year-old, who was hacked to death outside Woolwich barracks in east London on May 22.

Around 1,000 people lined the streets to pay their respects to the soldier brutally killed in broad daylight.


Members of the public applauded Fusilier Rigby's comrades and forces veterans as they arrived for the funeral service at Bury Parish Church, where comrades had maintained a guard of honour overnight.


Applause also greeted the father's heartbroken loved ones, who joined about 800 mourners inside for the private service just a couple of miles from his home town of Middleton, Greater Manchester.


Members of the Royal Regiment of Fusiliers held a two-minute silence to honour the soldier, whose death shocked the nation... 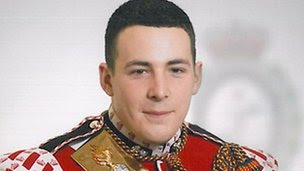 Fusilier Lee Rigby's family have said the soldier "has become a hero" since he was killed in London in May.

The 25-year-old from Middleton, Greater Manchester, was killed as he returned to Woolwich barracks from the Tower of London on 22 May.


His wife Rebecca said: "We have had an awful lot of support from across the world. It has been overwhelming."


Mother Lyn said they had "thousands of cards with kind words" that had "given us the strength to get through".


She said her "fun-loving" son had "fulfilled his dreams" by serving in the Army... 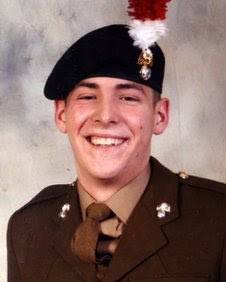 The body of Fusilier Lee Rigby has arrived at his regiment's garrison church for an overnight vigil on the eve of his funeral.

The soldier, from the Royal Regiment of Fusiliers, was killed in Woolwich, south-east London in May.


Drummers escorted the cortege to Bury Parish Church, with onlookers applauding as it passed.


A service then took place for the family ahead of a full military funeral and private committal on Friday.


The father of one had served in Afghanistan and was a drummer for the regiment....