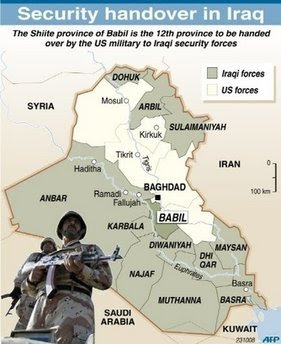 
The following came to me via CJ, and it should be read fully and understood. I am copying it in it's entirety here since I believe this IS what the mission in Iraq is all about. Now, more than ever, I believe it is important that ALL American voters understand the progress that has been made in Iraq:

"Earlier Today, In Yet Another Sign Of Security Improvements In Iraq, Primary Security Was Turned Back Over To The Iraqis In The Province Of Babil … South Of Baghdad And Home To The Ruins Of The Ancient City Of Babylon … It Becomes The 12th Of 18 Provinces To Take A Lead For Its Security Operations In Iraq."

Associated Press: "The U.S. relinquished control of a southern province that includes Sunni areas once known as the 'triangle of death,' handing security responsibility to the Iraqi government on Thursday."

Ambassador Crocker and General Odierno: "The United States Embassy – Iraq and Multi-National Force-Iraq welcome the transfer of security in Babil Province to Iraqi responsibility as a positive step on the path to Iraq's self-reliance.

Iraqi Security Forces in Babil have been operating independently for the past several months. Working with local government and military officials, they have demonstrated their readiness to assume responsibility for the provincial security of Babil. Today this responsibility is theirs.

The transition of responsibility for security in Babil Province is an important step. The provincial and military leadership in Babil will have to work cooperatively in order to maintain the security necessary for long-term economic prosperity. We will assist as needed. The United States Embassy and Multi-National Force-Iraq congratulate the Government of Iraq on this important milestone." (Joint Statement by Ambassador Ryan C. Crocker and General Raymond Odierno, Press Release, 10/23/08)

Babil is the twelfth province to achieve Provincial Iraqi Control.

In June 2005, Iraq's Prime Minister announced a joint decision between the Iraqi government and Multi-National Force – Iraq (MNF-I) to systematically hand over security responsibility in Iraq's 18 provinces to the Provincial Civil Authorities under the control of the province's governor. The responsibility for security in each province will become that of the Local and National Iraqi Police Service (IPS), the Iraqi Army (IA), and elements of the Ministry of Defense (MOD) and Ministry of Interior (MOI).

The Joint Committee to Transfer Security Responsibility (JCTSR), comprised of Iraqi, MNF-I and Embassy representatives, was commissioned in July 2005 to develop a set of conditions assessing the readiness of each province for Provincial Iraqi Control (PIC).

The selection of a province for transfer of sovereignty is based on an exhaustive examination of criteria:

This is great news, progress in Iraq by our dedicated troops is what gives me hope in this country. I'm curious though what will happen with Iraq when Israel/USA wipe Iran off the map when the go online with their nuclear armament? Will it completely become unstable again, or will Iraq and the current Coalition forces be able to fend off any uprisings? Just a curious thought.