Captain Robert Semrau: One of Canada's finest dismissed from the military 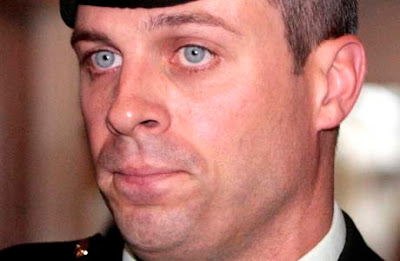 Captain Robert Semrau
Captain Robert Semrau during a bail hearing at the Canadian Forces Base Petawawa. Semrau is charged with second-degree murder in the death of an unarmed man in the southern Afghan province of Helmand last October. Photograph by: Christopher Pike, Reuters 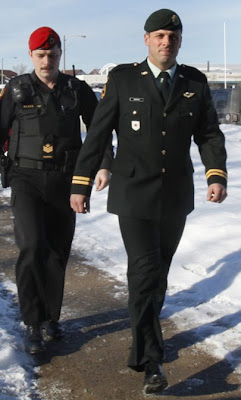 Last month, Captain Robert Semrau's military career came to an end. Canada lost a career soldier who, by all accounts, was a credit to the country's armed forces.

No longer reporting for duty

Dismissed by the Canadian Forces, Robert Semrau begins the next stage of life—as a civilian

His trial made headlines around the world—and sparked a fierce debate about mercy killing in a combat zone—but Robert Semrau’s final day in uniform passed without any publicity at all. He arrived at CFB Petawawa on Jan. 13, enjoyed a farewell lunch with fellow officers, and after many hugs and handshakes, left the base for the last time. As a civilian. “He certainly didn’t leave under a cloud of shame,” one soldier told Maclean’s. “Everyone wished him the best, and told him how tough it was to see him go.”

For Semrau and his family, tough doesn’t even begin to describe the past three years. In the summer of 2008, the Moose Jaw, Sask., native deployed to Kandahar as a respected infantry captain assigned to mentor Afghan troops as they hunted for Taliban. By December, he was on a plane back home, accused of putting a gravely injured insurgent out of his misery with two bullets to the chest.

Never before had a Canadian soldier been charged with battlefield murder, and when his court martial finally began in March 2010, Semrau was staring at a possible sentence of life behind bars. But his lawyers—knowing full well that compassion is not a legal excuse for murder—never conceded that their client committed a mercy kill. In fact, the defence offered no alternative version of events....


I had been following this troubling case, but almost missed reports of Captain Semrau's final day in uniform.

Canadian media did cover this case, since it was the first time a Canadian soldier had been charged with second degree murder in a war zone.

A tale of four soldiers: the day that led to Robert Semrau's court martial

The day was hot and sunny, "a scorcher," according to some of the four Canadian soldiers whose lives would be forever changed by its events.

The weather on Oct. 19, 2008, was not unusual for Afghanistan's Helmand Province, an arid stronghold of the Taliban insurgency.

That morning, west of the town of Lashkar Gah, Afghan soldiers and their Canadian mentors were preparing to launch a joint operation. Intelligence reports suggested that as many as 400 Taliban fighters had moved into the area, threatening the security of a British outpost.

The Afghan-led military operation was to sweep and clear a stretch of land alongside the Helmand River.

Capt. Robert Semrau, the leader of a four-man Canadian mentoring team, had been given just 12 hours' notice that his men could be in the field for a month.

Semrau, the youngest son of devout Christian parents in Moose Jaw, Sask., was on his second tour in Afghanistan. His first had been with the British army in 2002, when he was among the initial wave of Western troops to enter Kabul after the retreat of the Taliban. A former high school football star and one-time fitness instructor, he was also a new father with a five-month-old daughter back at Canadian Forces Base Petawawa in Ontario.

About two hours into the Helmand operation, a lead element of the Afghan National Army came under hostile fire.

A U.S. Apache helicopter was called in and fired several bursts from its 30-mm automatic cannon. The gun can fire more than 600 rounds a minute.

Some time later, on a narrow dirt track at the edge of a cornfield, Longaphie and Haraszta came upon a badly wounded Taliban fighter surrounded by Afghan soldiers. The insurgent had been shot from a tree by the attack helicopter; he had life-threatening wounds to his abdomen and legs.

Neither Canadian offered the wounded insurgent medical treatment. Longaphie presumed the man dead; Haraszta felt he didn't have the advanced skills needed to help him.

Capt. Shafiqullah told the Canadians to leave the injured man in the hands of Allah, then he pushed on with his command element. Semrau and Fournier followed.

Military prosecutors allege Semrau had several options at that point. Under a strict interpretation of the rules of engagement that govern the conduct of Canadian soldiers in Afghanistan, Semrau should have offered the insurgent first aid and called in a helicopter or field ambulance to take him for help. It was also open to Semrau to leave the wounded man at a battlefield collection point to be picked up later.

In a moment, Semrau had to decide the best course of action...

There is much more detail of what happened that day, here. The decision then-Captain Semrau made resulted in a court martial with the following charges:
On September 18, 2009, the Canadian Forces announced that Captain Semrau would be facing General Court Martial on four charges: What followed must have been harrowing for Captain Semrau, his family, his fellow soldiers on that mission, and all of Semrau's brothers and sisters in arms, both at home and still on mission in Afghanistan.

A new father, he faced a harsh penalty from the institution to which he had devoted his life. I read somewhere that one soldier thought so highly of Captain Semrau that he would have 'followed him into hell.'

Yes, in those few minutes on that dusty trail, Captain Semrau may have not lived up to the military, nor legal expectations placed upon all our troops. However, this Afghan - whose body was never found - this mortally wounded combatant, was considered to be 'dead' by the Afghani soldiers, who covered his head in the local tradition, and went on their way.

It is a fact that any of our troops in harm's way are called upon to make life and death decisions in an instant, every single day on the battlefield. We cannot know what really happened on that day. We cannot know what went through Captain Semrau's mind as he thought about his options.

...During his sentencing hearing, Maj. Cayle Obermayer, who fought with Semrau in Afghanistan, testified that he was “the best mentor he had worked with.” (Another infantryman, Pte. Joseph Villeneuve, recalled how Semrau saved his life during a deadly mortar attack in the volatile Panjwaii district.)...

Captain Semrau's ultimate conviction by a military panel saw him acquitted of murder and attempted murder, but he was convicted of disgraceful conduct, was dismissed from the military, and his rank was reduced to second lieutenant. Semrau did not go to jail. From what I have read, although Semrau was convicted of 'disgraceful conduct,' the judge said he would not be dismissed from the military in disgrace. In theory, this means he could apply to rejoin the military.

"He's a warrior," [...] "He should be, and would love to be, serving the Canadian Forces and serving his country, but he thanks you all. He thanks the Canadian public for all the support that he has been given throughout the process.

"We still have troops overseas in harm's way. He only asks that you direct your support to those troops who are in harm's way throughout the world," Hodson said. (CBC here)

From all I have read, Captain Semrau is a thoroughly decent man, a credit to the uniform he so ably served throughout his career.

A dozen other soldiers wrote letters of support to the judge, praising Semrau’s “tremendous courage and moral fibre.” Recently released by the Department of National Defence, they paint a very clear picture of the kind of officer the army just lost. “I have always joked with friends that I would ‘follow Rob through the gates of hell,’ ” wrote one captain from the Royal Canadian Regiment. “Despite his recent conviction, I would absolutely still follow him into the ﬁeld and strongly believe that all that know him would do the same.” (Macleans)

Who among us can definitively say that we would not make the same choices as Captain Semrau did on a dusty trail in Afghanistan, if faced with the same situation?

Found an interesting (CanCon) blog post, which pretty much sums up my views on all of this:

...yet for doing what he was trained to do, somebody is still trying to make him accountable for the choices he had to make in the name of freedom for others under life-threatening conditions. Give the hero a break already, and let him move on...(go read the rest here.)

Our troops are all highly trained in military matters, and they serve their countries with great courage, as a credit to us all. I have no doubt that every single day, our soldiers are called upon to make split second decisions; they are expected to weigh the moral -v- military dimensions in the fog of war.

From all the research I have done for this writing, Robert Semrau is an extraordinary man, an exemplary officer, who has conducted himself with great dignity throughout these extraordinary circumstances. I have absolutely no doubt that whatever he decides to do next in his life, Semrau will apply himself with the same dedication and tenacity, as he gave in service of Canada's military.

Robert Semrau truly is one of the best Canada has to offer, and I am grateful for his service, his courage. I wish him and his family much success and happiness. They have more than earned it.

[For more background on these events, go here, here, here, and here. Another Canadian blogger wrote on this in January 2009 and, in the comments, somebody offers this : Sadly bleeding hearted liberals think that we should be handing out Maple syrup and Tim Hortons coffee. Go read the column, and comments, at - What The F*&#!?!? -]
Posted by The Brat at 2:22 AM

jesus if they are that picky then half the ww2 vets should be facing charges
using a precious bullet, (yes they are precious when you are miles from the nearest dump) on a horribly wounded enemy is the heights of respect one warrior can give to another
you will read the article and forget it
the cap gotta wear it for life
dismissal or no dismissal

I don't know if the first post went through
cruelty would have been to let the man suffer excruciating pain
the highest honor one soldier can bestow upon an enemy is to put him out of his misery.
civvies don't understand that, and they never will.
half of the ww2 vets would go to jail if they tracked down all the euthanasia one soldier gave a suffering foe.
now if he sat there and laughed while the man screamed and watched him with glee- he might have to see a shrink but he wouldn't be in trouble
we can't afford to toss out our best soldiers/leaders, they are all that are keeping your sons and daughters sisters and brothers alive
most likely he will be replaced by some bookworm knob who will hide under the truck if he hears a car backfire.

"you will read the article and forget it"...


There you are wrong, "anonymous"...By posting the travesty of what happened to Captain Semrau here, I am ensuring that what happened to him does become part of the historical record.. (YOU found it here.)

I will NEVER forget.