Well, no, not really, or at least not yet. Julian Assange, frontman for Wikileaks, is today in a London courtroom, again fighting extradition to Sweden. From the Beeb: 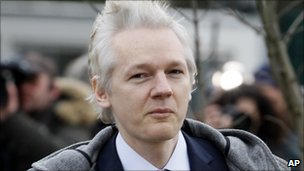 Mr Assange and his supporters claim the inquiry is politically motivated

There is a risk of "flagrant denial of justice" if Wikileaks founder Julian Assange is tried for rape in Sweden, his lawyer has told a UK court.

Geoffrey Robertson QC fears his client could face the death penalty if extradited to the US on separate charges relating to Wikileaks.

But prosecutors say any threat of unfair treatment would see the European Court of Human Rights intervene.

His lawyers told the extradition hearing in London he was "willing and able" to co-operate with Swedish authorities, so no arrest warrant was needed.

(read the rest about 'poor' Assange being so unjustly treated here.)

Am I the ONLY one who sees the huge irony here? This is the 'man' who so bravely stretches the boundaries of the new media - and decency - bleating that he won't get a fair trial in Sweden!!! This is a man who took it upon himself to decide what 'open and transparent' government should mean, resisting answering the rape accusations in a courtroom. I guess, just like his Wikileaks treason, Assange prefers that his OWN behaviour, misdeeds, never see the light of day.

I *could* make a great case that rape is never political, ( setting aside the rape by politicians of the citizenery. But that's a whole 'nother story!) but instead will merely suggest Mr Assange should be extradited to Sweden ASAP. He can there continue to proclaim his innocence to the crimes of rape and sexual assault. IF he IS innocent of such charges, I would think he would be more than happy to lay this to rest. That way he would be free to focus his energy on more 'important' matters - you know, like sharing nations' confidential secrets. (*spit*) Oh and apparently, according to something I found this morning? The sentence for this crime, in Sweden, could be one year in prison. Not quite the 'death penalty' myth that Assange's lawyers are sharing with the msm, and that they are willing to perpetuate.

Methinks Assange should just be thankful he is not being shipped to Iran - or other like 'justice' systems.