It seems every week we lose more of the heroes from 9/11. We don't always get to hear of these heroes passing, but just this last week, I found notices of two that we lost: one a firefighter, and one a police officer.


Lt. Randy Wiebicke who, like so many New York City firefighters, toiled in and around ground zero in the months after 9/11, died Wednesday following a nearly three-year battle with multiple myeloma, an aggressive and fatal blood cancer.

Wiebicke underwent an experimental stem cell transplant procedure last summer, when his cancer was in remission. But just two months after the transplant, he developed viral infections that, ultimately, his weakening body could no longer fight.

Wiebicke's wife, Madeline, said Randy was "a man who lived his life in the spirit of what being a firefighter meant to him. When others were in danger, running out of a burning building, he was there to run in," she wrote in an e-mail. "He lived his life beautifully, in a way that inspired everyone around him. Having Randy around not only made you want to be a better person, but it showed you how to get there," she wrote...

There is more at Firehouse.com here.

[...] Randy was a true outdoorsman who loved boating, fishing, camping, and he was the handiest guy ever met. His daughter Katie Rose liked to describe him in one word: "rustic". Randy is survived by his loving wife and best friend of 27 years, Madeline (McCullagh) Wiebicke. Madeline was constantly at Randy's side during his heroic one-and-half year battle with his disease. He is also survived by his three children: son Danny, of New York City, and his daughters Marianna and Katie Rose of Bardonia....[...]

CNN has been documenting this hero's journey, and they have this:

Wiebicke, who was stationed at a firehouse just blocks away from the twin towers, was not scheduled to work on the morning of 9/11, but raced to get there following the attack. In an interview last summer, Wiebicke told CNN's Deborah Feyerick that he rushed into the city with the mistaken notion that he would be rescuing people.

"I started getting equipment together, you know ropes and things, and I stopped at the local firehouse and got stretchers and went down and went right to the site and there was hardly anybody," he said, tearing up as he spoke. "It was just silent. Nothing, nothing, nobody alive."

Madeline Wiebicke said her husband came home after three days working in "the pit" with his gear covered in soot and ash. In the months that followed, she reminded him in an interview, "every time you drove to work and would come home you'd have a coating of dust on your car."

He soon developed the respiratory problems that came to be known as the "world trade center cough." But after retiring in 2002, the cough faded and Wiebicke looked forward to spending time on home projects, like building a new chicken coop in the backyard. "I thought I was bulletproof," he said last summer, while sitting near that almost-completed coop.

In the summer of 2008, he began feeling sick and, in what he described as "hitting a brick wall," his kidneys began to fail. "It was like somebody shut a switch on my whole digestive system and, you know, it felt horrible."...

There is a video interview that Randy and his wife Madeline did last year here. 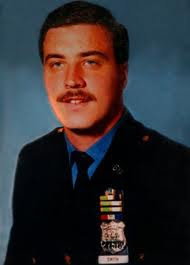 9/11 responder Harold J. Smith a 47-year-old retired New York Police Department sergeant, lost his battle with kidney cancer Saturday at 12:35 a.m. He had retired and moved from Staten Island to Barnegat in 2007.

His wife Margie said Saturday that in August 2008 his doctor "had discovered that cancer had concentrated in his kidney.''

She said doctors found the cause of the cancer to be linked with the toxins that Smith had ingested at a landfill in Staten Island where debris from the Twin Towers had been moved.

"He was in remission after they removed his kidney. He would go every three months for a checkup but it came back in May of 2010," Margie Smith said. "We were married for about 19 years. He was a great man and he'll be missed by a lot of people."...

BARNEGAT — When Harold J. Smith was diagnosed with kidney cancer, bitterness was a plausible option. His doctors told him the illness was the result of the toxic dust he had ingested during the months of clean-up after the Sept. 11, 2001, attacks at the World Trade Center.

But the man they called "Smitty" didn’t choose it.

"If he had to do it over again, he would," said Smith’s wife, Margie, choking back tears. "He was an awesome man, a loyal friend to everyone and a hero. He always looked out for people. And he left here fighting."

Smith, a Barnegat resident and a 9/11 first responder, died early today at his home. He was 47.

Smith was a retired New York Police Department sergeant who worked in the narcotics division on Staten Island. In addition to being on the scene at Ground Zero, he worked for months at a Staten Island landfill where rubble from the Twin Towers’ was taken and sifted through.

"There were many nights he would come home in soot and never complain about it," said Smith’s daughter, Christina. "It was always about helping everyone else. It was never about him. He was always very giving."

Charles Giles, a fellow 9/11 first responder who has championed health benefit efforts for 9/11 workmen, said Smith was the 995th rescuer to die since the attacks.

"Harry Smith was a giant amongst men," said Giles, also a Barnegat resident who is battling health problems himself. "He had a caring and loving heart. He’ll be missed by all."

In a video interview with The Star-Ledger about Sept. 11 first responders, Smith was described as someone who "feared nothing, even as he battled death," by his NYPD partner and long-time friend John Votto.

"Being down there (at Ground Zero) broke his heart, seeing all that destruction," Votto said. "He never got mad and never cursed, ‘Why did this happen to me?’ He realized he put himself in that position and he would do it again. He wouldn’t think about it twice."...

Go here to read more about this 'giant amongst men.'

My heart goes out to all who love these two fine heroes, who served their fellow Americans on 9/11, and in the aftermath, with no thought of themselves. America is the poorer for their passing.

ALWAYS remembered and honoured.
Posted by The Brat at 2:22 AM