Robert Gates: On the record about his record 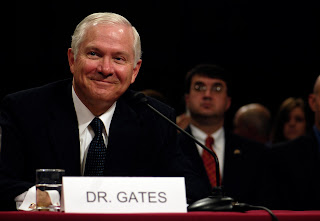 As Robert Gates prepares to leave the office of Defense Secretary in the US, the DoD - via American Forces Press - has published a series of articles about him. I posted the first over at WOTN the other day:

DefSec Robert Gates to troops in Kandahar: “I’ve come out here to thank you for the last time for your service and for your sacrifice. More than anybody except the president, I’m responsible for you being here. I’m the person that signed the deployment papers that got you here. And that weighs on me every day.” WASHINGTON, June 23, 2011 – It’s 110 degrees in the shade, and Defense Secretary Robert M. Gates is answering questions from about 200 soldiers at a bleak U.S. installation near Kandahar, Afghanistan, in mid-June.

At the end of the session, he tells them he has one more thing to say: “I’ve come out here to thank you for the last time for your service and for your sacrifice. More than anybody except the president, I’m responsible for you being here. I’m the person that signed the deployment papers that got you here. And that weighs on me every day.” It’s tough for the secretary to get through this statement. He steps away from the microphone, and there are tears in his eyes. The soldiers in the audience -- from the 4th Infantry Division’s 1st Brigade -- are moved, as well. Gates receives prolonged applause. As he hands out commemorative coins to the troops, they thank him for his service and all he has done for them.

“I’ve told friends that I would be more than happy if the only legacy I took away from this job is those kids out there in the field knew they had someone who was looking after them, all the time,” Gates said in a recent interview with American Forces Press Service during his last trip to visit deployed troops....

This a great read, with insights into the man who has held the office through such tumultuous times in America's history. Go find the rest and read it here.

Part 2 focuses on Iraq and Afghanistan:

"“All the evidence we have, all the political leaders in Iraq -- with the exception of Sadr -- want us to stay for training and to have a presence,” Gates said, “and we’re prepared to do that.” The secretary added that he believes it will happen.

“It’ll be ugly, it’ll be at the last minute, and it’ll create all kinds of hassles for us logistically, but I think they see it as very much in their interest, and so do we,” he said. “It’s just a matter now of getting the ball across the goal line,..."

WASHINGTON, June 23, 2011 – The whole time Robert M. Gates has served as defense secretary, the nation has been at war on two fronts.

When Gates came on board in December 2006, his focus initially was on Iraq, where sectarian violence threatened to rip the country apart. He then shifted his attention to Afghanistan, where the Taliban regained the initiative while the United States was preoccupied with Iraq.

Gates was the man President George W. Bush tapped to retrieve the situation in Iraq. The secretary was familiar with the situation on the ground. As a member of the Iraq Study Group, he had traveled in the country and spoke with U.S. and Iraqi leaders. He had met with the troops doing the heavy lifting and taking the casualties in Baghdad, Tikrit and Anbar province.

The day after Gates took office, he boarded an aircraft for Baghdad and consulted with U.S. and Iraqi leaders. It was the first of 13 visits to Iraq as defense secretary. “I had three priorities when I arrived: … Iraq, Iraq and Iraq,” the secretary said during a recent interview with American Forces Press Service.

As the surge troops arrived in Iraq, violent incidents rose to 500 per week, and American casualties climbed along with them.

The secretary had to convince Congress to stay the course and that it was essential to American security that people not perceive the United States had lost in Iraq. In one instance, he cancelled a trip to Latin America to be available to talk to U.S. senators who were wavering in their support for Iraq.

Despite initial doubt from some, the surge worked. At its height, there were more than 166,000 American service members in Iraq. By the summer of 2007, leading indicators in Iraq showed progress: the number of “no-go” neighborhoods was declining and violence was going down. The “Anbar Awakening” formed the Sons of Iraq security force and gave the Iraqi government breathing room to establish control and provide much needed governance and economic growth.

Now that Iraq is relatively peaceful and fewer than 50,000 American troops remain in the country as trainers for Iraqi security forces, it is easy to forget how dangerous the situation was....

Part 3 is a wide-ranging discussion of issues he faced, and which will continue to face our warriors; from wounded warrior care, to TRICARE, to retirement, to DADT, his off-the-record lunches with junior service members, and more. 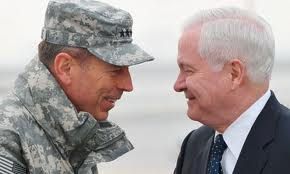 “The one thing I have never been willing to do in this job is use troops as props. You’ll never find me in an event with troops behind me on the stage. It always makes me nervous. Another thing I don’t like about town halls is how long they have to be there before I get there. They’d rather be in bed.” [...]

I am more candid with these young people than I am with anyone else,” he added. “It’s because I trust them and believe in them. They are the only thing I will miss about this job.”

WASHINGTON, June 23, 2011 – Defense Secretary Robert M. Gates has served for four-and-a-half years -- longer than all but four of his predecessors -- but he still has some unfinished business.

Gates remains concerned about the treatment of wounded warriors. He regularly visited Walter Reed Army Medical Center here, the National Naval Medical Center in Bethesda, Md., and Brooke Army Medical Center in San Antonio, the site of the Defense Department’s burn center. At Brooke, he said, he noticed the effect of the mine-resistant, ambush-protected vehicles he had worked so hard to field quickly.

“One of the advantages of the MRAP is, compared to the first year I was in this job, the burn unit is almost empty,” he said. “So many of these kids were getting horribly burned in the Humvees. The last time I was in Brooke there was no one to see in the burn unit.

“It may be the worst ride in the world -- I think it may be like an old buckboard,” he continued. “But it has saved lives.”

Fiscal challenges remain for the department. Health care costs are skyrocketing -- from $19 billion in fiscal 2001 to $51 billion this year. “It’s eating the department alive,” Gates said.

He doesn’t disagree with those who say the significantly lower cost of the TRICARE military health care plan for working-age retirees is one of the benefits of their service. But nobody made any promise that it would never change, the secretary said. Annual premium costs for working-age retirees could go to $520 from $460 and then be indexed to keep the costs at one-seventh, one-eighth or one-ninth what their civilian counterparts pay for health plans, he said.

“I’ve got no problem with retirees paying a fraction as part of their benefit, but there’s nothing to say it has to stay at the same dollar figure forever,” Gates said. “The department simply can’t afford it. There’s just no two ways around it.”

Rumors have the department changing service member compensation as part of its belt-tightening, but this is not true, Gates said.... 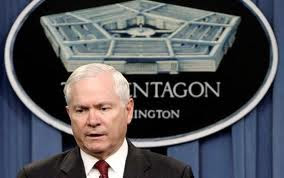 Part 4 reflects on the culture within the Pentagon, and the fiscal cuts being demanded of the military.

WASHINGTON, June 23, 2011 – When he first took office, Defense Secretary Robert M. Gates had no intention of changing the culture of the Defense Department. He was focused almost exclusively on the war in Iraq.

During his two years with the Bush administration, he did tee up “broader issues that needed to be addressed by my successor, and punted those to my successor,” Gates recalled. But he found himself on the receiving end of those punts, he said, when President Barack Obama asked him to stay on as defense secretary.

“The major, more dramatic steps that I took during the first term that went after the institution were really to just try and get things to the troops,” Gates said.

This started with the wounded warrior issue at Walter Reed Army Medical Center here and then the mine-resistant, ambush-protected vehicles needed to protect deployed troops from roadside bombs. He also pushed to improve battlefield medical evacuation and to get more intelligence, surveillance and reconnaissance capabilities into the combat theater.

“But I became increasingly frustrated during that period with the inability to get any of those things done within the usual organization,” the secretary said. He began thinking about what needed to be fixed, how to build more agility in the system, how to make people more realistic, and how to impose more discipline in what the department buys.

“So that really teed up the agenda, once I was given renewed lease to begin tackling these broader issues,” he said.

So he went after the culture in the Pentagon, particularly the part of it that developed over 10 years of having an open checkbook...

This is really an interesting look behind usually closed doors. Read the rest of the final part of the series with Robert Gates here.

I must confess that I have only been aware of Robert Gates in the most recent years of his public service career, as Secretary of Defense. Then I found his biography here. 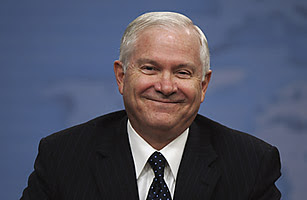 Truth is that, love him or not, disagree with his decisions or no, Dr. Robert M Gates has served America well.

Email ThisBlogThis!Share to TwitterShare to FacebookShare to Pinterest
Labels: Robert Gates AFP interview series, Robert Gates on the record about his record