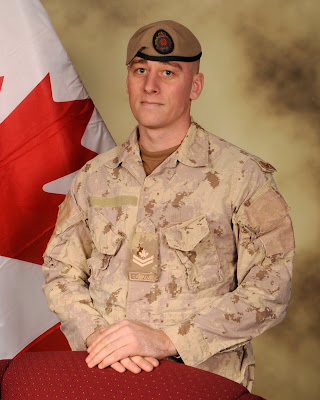 As the incident is presently under investigation by the Canadian Forces National Investigation Service, no further details are available at this time.

Our thoughts are with the family and friends of our lost comrade. Our primary focus at this time is to provide the best possible support to the family of our soldier and to his colleagues.

[...] Roy, originally from Rimouski, Que., was a logistician responsible for transport of troops and equipment on his second deployment to Afghanistan, said Brig.-Gen. Dean Milner, the commander of the Canadian task force. His age was not released.

In his spare time, Roy liked to fish, run and had a passion for old cars, Milner said.

"Our thoughts at this time are with the family and friends of Master Cpl. Roy," he said. ..

Always remembered and honoured. My heart goes out to all who love this fallen HERO.

Email ThisBlogThis!Share to TwitterShare to FacebookShare to Pinterest
Labels: Some Gave All Master Cpl. Francis Roy

Bless your soul ...Sleep well our HERO, you will be missed