British and US forces train Afghan forces in IED detection 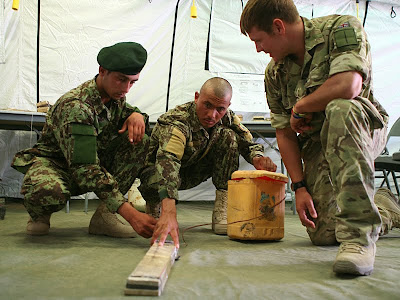 The Explosive Hazard Reduction (EHR) course at Joint Sustainment Academy Southwest (JSAS), based at Camp Leatherneck, the US Marines camp adjacent to Camp Bastion, prepares members of the Afghan National Army (ANA), uniformed police and border police to operate in a partnership role with coalition forces when IEDs are encountered. It also teaches the basics of insurgent IED tactics and how to handle and eliminate unexploded ordnance and munitions.

On the course, students learn to locate, identify and disarm victim-operated IEDs, such as pressure plate and trip wire devices.

Another of the course's aims is to teach ANSF personnel to perform searches alongside coalition units:

"We teach them how to spot the IEDs, place a charge next to it, and then how to blow them up," said US Senior Chief Petty Officer Ronald Ameika, an explosive ordnance disposal (EOD) technician and instructor at JSAS....

Email ThisBlogThis!Share to TwitterShare to FacebookShare to Pinterest
Labels: IED training for Afghans by UK and US troops