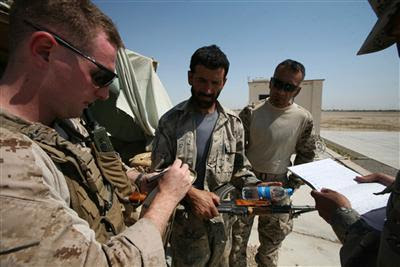 As a mentor with Border Advisor Team 1 in Afghanistan’s Helmand province, Abell advises border police leaders on how to secure their borders and key points of entry effectively and efficiently.

Abell said he believes in hard work, dedication and determination, and that those are the qualities he’s working to instill.

“His integrity is his best feature,” Holliday said. “I have never known him to be crass or disrespectful to his juniors.”

Abell, an Akron, Ohio, native, takes the hard work and experience he gained growing up with him into his work. At Revere High School, he was a football team captain, class president and a member of the drama guild. He graduated from Harvard University in 2008 with a bachelor’s degree in American history.

These experiences instilled the knowledge that extra time and effort can make the difference between success and failure, a lesson he finds applicable in his mentor role, he said.

Abell said he has three goals as a mentor: to train strong leaders, to have accountability for all training and equipment, and to move the border police leadership to a new, centralized location.

“Having strong leaders will ensure that their borders are secure and their unit is free from corruption,” Abell said. “Getting them moved into their new headquarters will be a big step to them having more capabilities and independence.”

A standardized point system for promoting border police and a direct deposit payment system are other improvements Abell said he would like to see implemented.

Though his team has seen progress in preparing the border police here to handle Lashkar Gah’s security by themselves, work remains to be done, he acknowledged.

“We’re taking it one step at a time,” he said. “This way, we’re making a sturdy foundation of success we can build on. In the end, it’s their country to win or lose, and I think most of them have decided they want to win.”