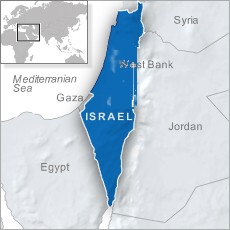 Earlier this morning Israeli planes destroyed the Yarmouk arms factory in Khartoum, Sudan’s capital – 1,300 miles from Israel; in 1998 the plant was suspected of holding Iraqi chemical weapons which Saddam Hussein wanted to conceal from the UN inspectors; Sudan has become a major corridor of arms for Hamas, and Israel has conducted several military operations inside Sudan aiming to disrupt shipments of arms to Hamas; in April 2011 Israeli special forces, ferried by helicopters into Sudan, ambushed and killed two high-level Hamas officials who were on their way to Libya to finalize a deal, financed by Iran, to buy about 800 chemical munitions from anti-Qaddafi rebels who had taken over a couple of chemical weapons depots from the pro-Qaddafi forces


Sudan’s defense minister earlier today said that four Israeli military planes attacked and destroyed an arms factory in Khartoum, the capital, around midnight Sudan time. The distance from Israel to Kahrotum is 1,300 miles. The attack ignited a huge fire in the destroyed facility and neighboring buildings.


Sudan has been serving as major corridor for arms supplies to Hamas in the Gaza Strip. Some of the arms come from Iran and China, and others are being manufactured in Sudan itself. The arms are being loaded onto ships, which unload their cargo on the western coast of the Sinai Peninsula, where Bedouins, who are paid by Iran, ferry them north to the Gaza Strip.


Israel has conducted military operations in Sudan in the past, aimed to disrupt the weapons shipments to Hamas....

A top Israeli defense official said that Sudan was a terrorist state, and that its accusations against Israel could not be taken seriously.
10/25/2012

Israel hit back at Sudan Thursday, after Khartoum on Wednesday accused Israel of attacking a military installation in the country. A top Israeli defense official told Army Radio that Sudan was a terrorist state, and that its accusations that Israel engaged in terrorism against that country could not be taken seriously.

“Sudan is a dangerous terrorist state. To know exactly what happened (there), it will take some time to understand," said Amos Gilad, director of policy and political-military affairs at the Defense Ministry. "There are different versions of the Sudanese side, so there is no reason to go into details," Gilad responded to questions of Israeli involvement in the attack.

Sudan says it has evidence that Israeli warplanes carried out the attack, although it has so far failed to present that evidence. Sudan claimed that four Israeli aircraft fired missiles that hit a military factory and killed two people in Khartoum. The explosion at the military factory in Sudan's capital before dawn Wednesday sent detonating ammunition flying through the air, causing panic among residents, the official news agency and local media reports said. Sudan has demanded that the UN Security Council condemn Israel for the raid. A Sudanese official, Bilal Osman, said that a response by Sudan for the attack would be forthcoming, although “we reserve the right to react at a place and time we choose."

Israeli officials have long been following the situation in Sudan, which security officials said was a major source of weapons for Gaza Arab terrorists. Gangs of terrorists trained and set up areas of influence in the remote parts of the country, with large weapons warehouses. According to security officials, Sudan is a major hub on the route of smugglers moving weapons from Iran and Syria to terror groups in Gaza, Lebanon, and elsewhere. Several months ago, a car carrying several weapons smugglers and a large amount of weapons exploded at Port Sudan. Sudan accused Israel of involvement in that attack as well.

Meanwhile, a report in Arab media Thursday said that the U.S. had closed its embassy in Khartoum, Sudan's capital, on Tuesday – just before the attack took place, as if the U.S. had advanced knowledge of the attack. Hundreds of Sudanese gathered outside the U.S. Embassy in Khartoum calling for “death to Israel” and “death to America,” as they burned American and Israeli flags.  (emphasis mine)

(c) Israel National News
Posted by The Brat at 4:08 AM