Obama 'back on his game' 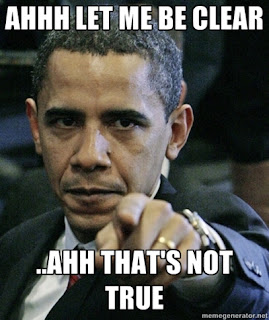 I deliberately chose to avoid the latest Romney/Obama encounter.  I refuse to call these tv stunts 'debates' since as far as I could tell from the first two, no rules of debate were followed, and ignorance was on full display.


Thank GOODness the CBC was paying attention and was able to *report* on the MIC and the next president of the US in NY last night:

Their 'unbiased' reporting began with "The president was back on his game."

Online:  "spirited,... re-energised ...An aggressive President Barack Obama accused challenger Mitt Romney of favouring a "one-point plan" to help the rich in America and playing politics with the deadly terrorist attack in Libya in a Tuesday night debate crackling with energy and emotion just three weeks before the election...."


CBC - as always - proves who they are backing in this never-ending run for the White House..

Not all watchers were so enamoured or blatantly biased and wearing their pro-MIC hearts on their sleeves, and the comments are fast and furious this morning.

One of my friends - a self  described 'Differently abled American Vet aka Enemy of the State' - has this:


Ok, I watched the "debate". As typical the "moderator" kept interrupting Mittens, and kissing the o's butt. The highlight for me was seeing o get so pissed off that it looked like he was going to snap and actually hit Romney. The only game o was on was his deflection of anything and everything. About the only thing that the two sort of agreed on was that China is to blame for some of the issues with the American economy. Which is complete bs, the simple fact is what they dont want to put out to the American people is that they have become lazy arrogant jackasses who think everything should be given to them. While in China the attitude is simple, 'everyone must have a job'. Good job or bad job its a job. Americans want the good job that has tons of perks and money and no effort, but politicians cant say that. The other big highlight was Mitts wife flipping the bird, yes that bird. "I hate it when it does that..." The simple summation is that o kept trying to lie and run from his record

And there you have it..  I am guessing this American Vet is not an "undecided"  voter..and I trust HIS judgement more than any of the high-priced pundits/reporters...