Gone to the dogs: MWD - finally - have their own Memorial

From My San Antonio:


Monument for dogs used in military to be dedicated

An eight-year quest to honor the four-legged guardians of freedom known as military working dogs will come to a culmination Monday in San Antonio.

The new U.S. Military Working Dog Teams National Monument will be dedicated at Joint Base San Antonio-Lackland, home of the world's largest training center for military and security canines and their handlers.

John Burnam, a former dog handler in the Vietnam War and a technical writer in McLean, Va., who led the $2 million project, said the scout and sentry dogs he worked with in the Army saved him from ambushes and booby traps.

“I give the credit to the animals, and the senses they used to protect me,” said Burnam, 66....


Much more - and pictures of MWD's too (I couldn't pick my favourite) - here.

UPDATE on the ceremony here:


"As a nation we owe our war dogs a tremendous debt of gratitude," said Burnam. "Their selfless service, loyalty and sacrifices to our country must never be forgotten. The U.S. Military Working Dog Teams National Monument is a treasure for us all to ensure they are honored and remembered forever."


From England, I found this story from back in the summer of a young woman and her amazing dog Gin.  Kate Nicholas and Gin wowed the judges as they performed "canine freestyle'.

Animal trainer goes from TV fame to the dogs of war


An animal trainer who danced her way into the finals of television show Britain's Got Talent with her moonwalking collie Gin is now training dogs to sniff out bombs in Afghanistan. 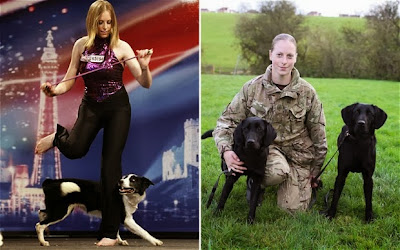 The pair danced their way to the series finals, then used their new fame to embark on a career of performances and pantomimes.

Yet five years later she has turned her back on the world of Showbusiness and put her formidable skills to a very different purpose. The 22-year-old has joined the Royal Army Veterinary Corps (RAVC) and trains dogs not to dance, but to sniff out Taliban bombs threatening British troops in Afghanistan.

“I joined the Army because I wanted to use my skills in a practical sense, rather than performing up and down the country,” she said....

There is much more - plus video of their performance on BGT - here.