Obama told us all, 'war is over in Iraq.'  Somebody forgot to tell the murdering, cowardly thugs.. The depravity of the Religion of Terror continues.  From Jihad Watch: 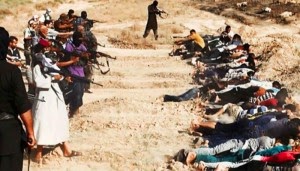 
Baghdad: As the world along with Pakistan mourns the death of children killed in the dastardly carried out terrorist attack in an army-run school in Peshawar by Taliban, reports of more violence from another brutal terror group have emerged.

Islamic State militants have reportedly beheaded at least 150 women, some of them pregnant, for refusing to marry them.

Iraq’s Ministry of Human Rights, in a statement released, said that the women in the western Iraqi province of Al-Anbar were attacked by the Islamic State terrorists and were later buried in mass graves in Fallujah....