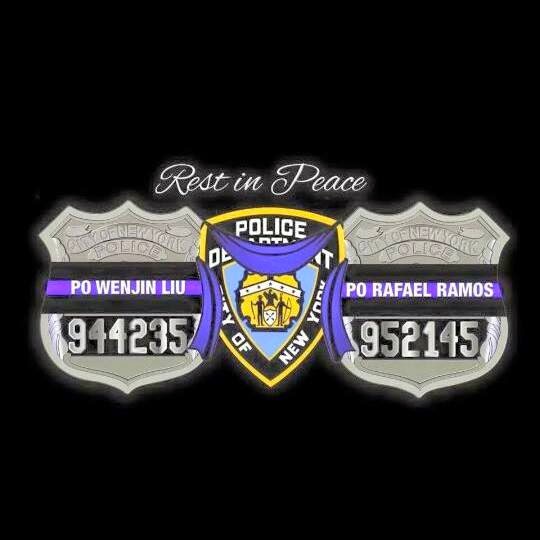 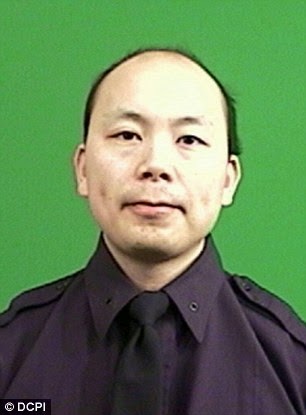 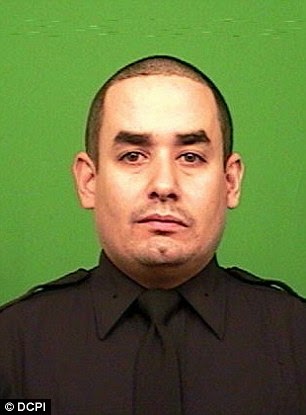 This coward, who had also just killed a woman, heeded the call of the race-baiters, and went looking for cops to kill.


The shooter — identified as Ismaaiyl Brinsley — boasted about wanting to murder cops in the hours before he ambushed the officers outside the Tompkins Houses in Bedford-Stuyvesant about 2:45 p.m.


“I’m putting wings on pigs today. They take 1 of ours ... let’s take 2 of theirs,” Brinsley, 28, wrote on Instagram, alongside a photo of a silver handgun.

At that link, deBlasio (Mayor of New York) says this in the aftermath of the slaughter:

...described the double murder as “an assassination” and a “despicable act.”


It “goes at the very heart of our society and our democracy,” he added. “When a police officer is murdered, it tears at the fabric of our society.”

Mr deBlasio, why don't you tell THAT to those racist mobs who yell "What do we want?  Dead Cops.  When do we want it? Now!"  Yes, those chants were being said on the streets of America, as that coward murdered the two Hero Police Officers.

Flashback to one week ago in NYC:

As the demonstrations have continued, no word from either Obama (guess none of the cops could be his son), Holder and Al Sharpton said nary a word to denounce this call for open hunting season on Police Officers whose sworn duty is to Serve and Protect ALL Americans. 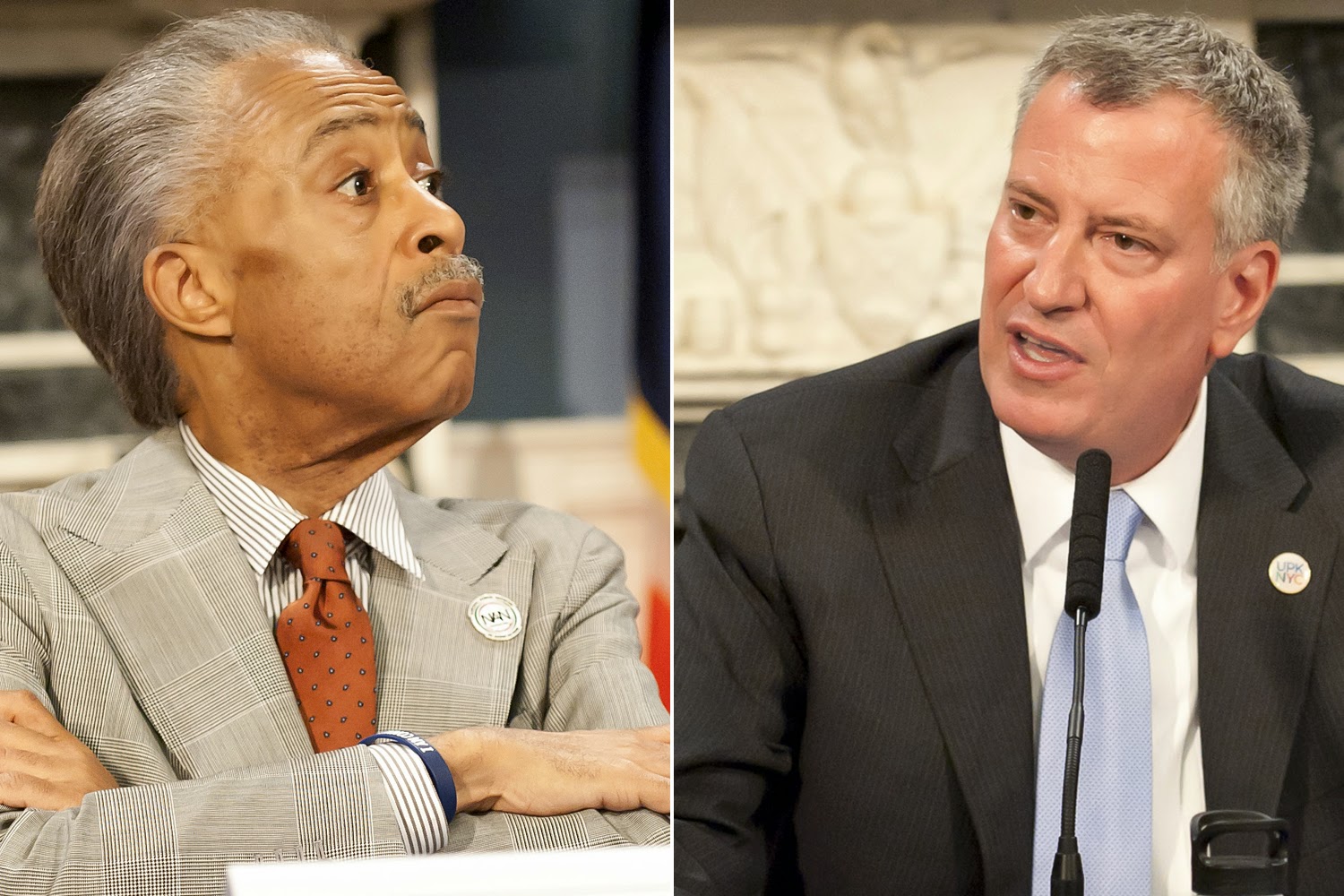 Go look what Sharpton was telling DeBlasio back in August  (Warning: It IS disgusting) Sharpton warns de Blasio: I’ll be your worst enemy 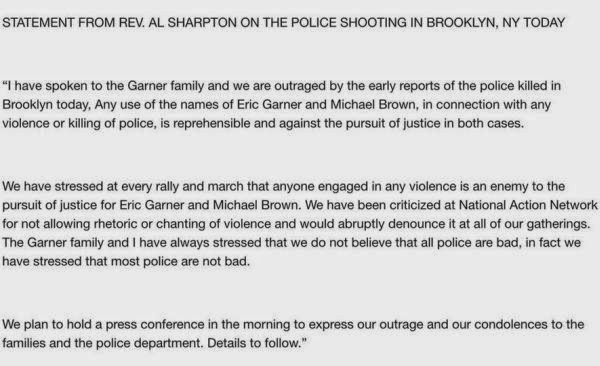 Of COURSE he plans another press conference.  That, and agitating is what Sharpton does best.  Never mind, NO matter what else spews forth from his hateful mouth, he and his ignorant, racist rhetoric is directly responsible for the death of these two Officers.  Period.

Ignorant?  Absolutely, and it has not gone unremarked that these two Officers were not even white cops.

On Twitchy was this:

Lost in the rhetoric: The two cops killed yesterday were Hispanic and Asian.
Where's the activists to lead marches on their behalf? 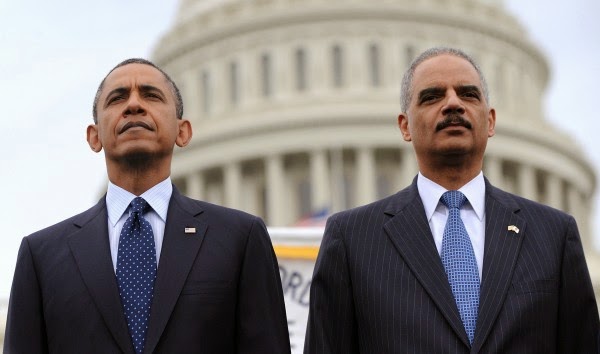 What about these two?  Well, I am still waiting for Holder to send his 'investigators' directly to New York.  No, not holding my breath.

Meanwhile,   it seems that Obama took time out from his busy Saturday night schedule to release a statement:

Two brave men won’t be going home to their loved ones tonight, and for that, there is no justification.

Tonight, I ask people to reject violence and words that harm, and turn to words that heal – prayer, patient dialogue, and sympathy for the friends and family of the fallen. [emphasis mine]

Interestingly, this has not made it to the official White site yet (yes, I did check) I found it at the Chicago Sun Times - you know, the city where on a daily basis innocents are slaughtered in anonymity, and not a word from the politicians.  Too bad the Mouth In Chief - you know, the one who has always been touted as the 'great unifer'  - and his minions,  do not encourage such rejection of hatred and race-baiting by their ACTIONS.


Meanwhile, two more families are left to mourn the loss of their loved ones. 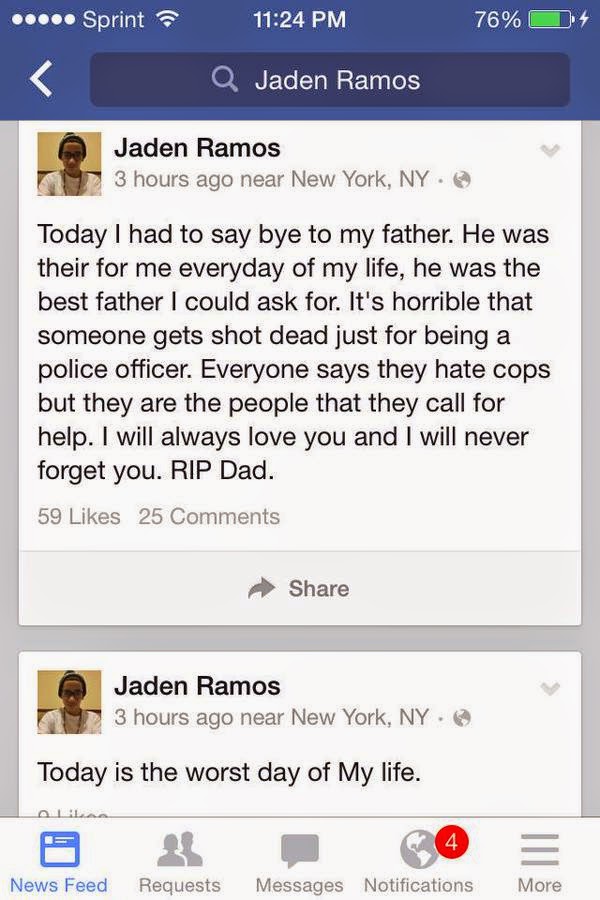 My heart is hurting for this young man and all who love these two Fallen Police Officers.  My heart aches for all those in the NYPD who even today are  putting on their uniforms and going out into the deadly streets to Serve and Protect.  On their shifts there is no black or white skin, there is NO politics.  There is - God and the race-baiter cowards willing - survival, and going home to hug the family.

NO words from anybody can change what happened yesterday - the huge holes left in our world because of ignorance.  Nothing I can do will bring back these brave young men.

And I am sick about it.

Claudia E. Thomas speaks for me when she says:


Our hearts go out to our Brothers and Sisters who see the face of evil daily ... For our brothers, Officers Rafael Ramos and Wenjian Liu - never again shall you need deal with the insanity of this world ... Soar with angels and thank you! May your families be surrounded with the prayers of millions who cry out in our anguish with them for an end to the evil that permeates our lands.

Officers Rafael Ramos and Wenjian Liu's watch may be done here on earth, and I wish I could believe that their loss would herald an end to the deadly racist evil parading the streets of America.  The realist in me knows this will not happen.

THERE ARE NEW THREATS BEING MADE TOWARDS NYPD OFFICERS via Instagram, etc. If you become aware of a threat - take action and not just re-post this stuff. Call 1-888-NYC-SAFE which is the terrorism hot line for the NYPD. The Instagram user, "woodgramflexinn" has made new threats. DO NOT call in this one as I've already checked and the NYPD is aware of him. IF YOU SEE OTHER threats, to the NYPD, call the above. For other agencies, look up the number and CALL IT IN! The what if's involved had someone called in the threats by today's murderer are endless. STAY SAFE BROTHERS & SISTERS ... We got your 6!

I echo her call, and I stand with ALL our Police Officers, and pray for their safety.

May these two Fallen Heroes Rest In Eternal Peace. 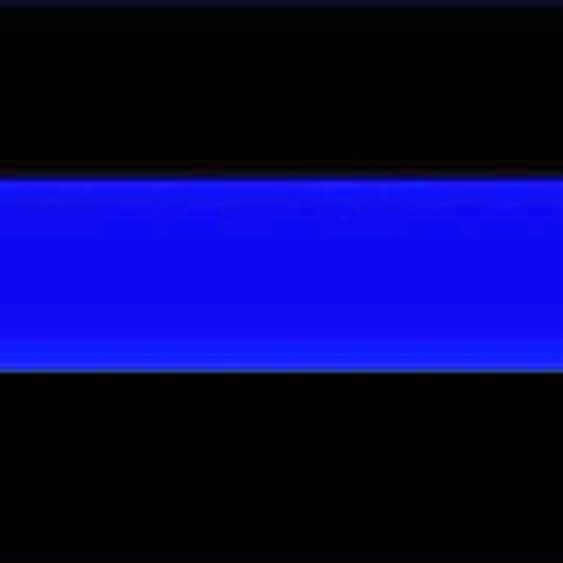 Related: Police officers turn their backs on New York Mayor Bill de Blasio as he is accused of having 'blood on his hands' over anti-police sentiments

(As always, read the comments there)
Posted by The Brat at 2:51 AM