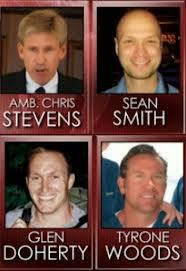 Of course, the latest revelations do not surprise those of us who continue to pay attention. This week it seems more documents have been obtained which show unequivocally that the narrative on the murders of US citizens on September 11, 2012, was a lie knowingly spread by Obama, Rice, Hillary Clinton and the administrration.

Judicial Watch  has this:

Administration knew of arms being shipped from Benghazi to Syria


(Washington, DC) – Judicial Watch announced today that it obtained more than 100 pages of previously classified “Secret” documents from the Department of Defense (DOD)and the Department of State revealing that DOD almost immediately reported that the attack on the U.S. Consulate in Benghazi was committed by the al Qaeda and Muslim Brotherhood-linked “Brigades of the Captive Omar Abdul Rahman” (BCOAR), and had been planned at least 10 days in advance. Rahman is known as the Blind Sheikh, and is serving life in prison for his involvement in the 1993 World Trade Center bombing and other terrorist acts.  The new documents also provide the first official confirmation that shows the U.S. government was aware of arms shipments from Benghazi to Syria.  The documents also include an August 2012 analysis warning of the rise of ISIS and the predicted failure of the Obama policy of regime change in Syria.


The documents were released in response to a court order in accordance with a May 15, 2014, Freedom of Information Act (FOIA) lawsuit filed against both the DOD and State Department seeking communications between the two agencies and congressional leaders “on matters related to the activities of any agency or department of the U.S. government at the Special Mission Compound and/or classified annex in Benghazi.”
Spelling and punctuation is duplicated in this release without corrections.


A Defense Department document from the Defense Intelligence Agency (DIA), dated September 12, 2012, the day after the Benghazi attack, details that the attack on the compound had been carefully planned by the BOCAR terrorist group “to kill as many Americans as possible.”  The document was sent to then-Secretary of State Hillary Clinton, then-Defense Secretary Leon Panetta, the Joint Chiefs of Staff and the Obama White House National Security Council.  The heavily redacted Defense Department “information report” says that the attack on the Benghazi facility “was planned and executed by The Brigades of the Captive Omar Abdul Rahman (BCOAR).”  The group subscribes to “AQ ideologies:”


The attack was planned ten or more days prior on approximately 01 September 2012. The intention was to attack the consulate and to kill as many Americans as possible to seek revenge for U.S. killing of Aboyahiye ((ALALIBY)) in Pakistan and in memorial of the 11 September 2001 atacks on the World Trade Center buildings....

Is ANYbody surprised by this?  Really?  Read the rest here.


As FOX reports, Judicial Watch had to sue 'the most transparent administration' in federal court to get these documents, which go part way (only) to confirm what MIC and his sycophants determined to keep from public view.