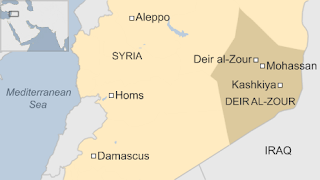 Israel National News has this about America's Man of INaction:


POTUS insists that US is investigating reports of attacks, but implies that chlorine may not justify action against Syria.


Widespread reports of chlorine gas attacks in Syria have not been prevented - or acted upon - because chlorine is not "historically" considered a chemical weapon, US President Barack Obama stated Thursday.


Obama was forced to answer the chlorine question during a press conference from a summit at Camp David with leaders of the Gulf states. Syria and Iran were key issues at the conference.


However, when pressed about chlorine, Obama evaded defining it as a "weapon," noting that it has many other non-threatening uses, as caught in this footage from the Washington Free Beacon.  ...


"Those who refuse to learn from history, are doomed to repeat it...."
Posted by The Brat at 3:10 AM

Email ThisBlogThis!Share to TwitterShare to FacebookShare to Pinterest
Labels: Obama and Syria, Syria and sarin gas, Tom Cotton on Syria