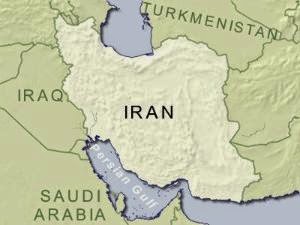 US Secretary of State John Kerry continues working on that 'understanding' with Iran , and Iran continues with their chants of  'death to Israel and America'..the rate of executions of citizens in Iran gathers speed.

Reports: Huge Surge in Executions in Iran
As many as 115 executions took place in the last two weeks in the Islamic republic.

The Iranian regime executed as many as 115 people in the two weeks to April 26, according to the opposition group the National Council of Resistance of Iran.

Another report speaks of 55 executions in a three week period in late March and April.

Execution followed me and my family every second. My family was executed with me over and over. If they had not received news from me for one day, they would come to the prison immediately thinking that we are finished... We were left in this situation where every minute felt like we had a noose put around our neck.

Ahmadi’s family has not heard from him since he wrote these words....

Kerry tells Israelis: U.S. “guarantees” it can prevent Iran from getting the bomb


U.S. Secretary of State John Kerry tried to assuage concerns in Israel over the nuclear deal with Iran, saying in a Sunday interview on Israel’s Channel 10 TV that “There is a lot of hysteria about this deal.” He added: “I say to every Israeli that today we have the ability to stop them if they decided to move quickly to a bomb, and I absolutely guarantee that in the future we will have the ability to know what they are doing so that we can still stop them if they decided to move to a bomb.”


Israel regards a nuclear-armed Iran to be an existential threat to Israel, and Israel’s prime minister Benjamin Netanyahu has been a leading critic of the emerging deal negotiation between the P5+1 group and Iran.


Kerry said the deal would not affect American options to counter any possible effort by Iran to build atomic weapons.


The Guardian notes that Netanyahu contents that the potential deal leaves intact too much of Iran’s nuclear infrastructure, including research facilities, weapons testing sites, and advanced centrifuges capable of enriching uranium to weapon grade....

My take-away questions is this:  WHY should Israel - or anybody else for that matter - trust anything that this US administration says?    We continually see evidence that the only consequence of  unacceptable actions by despots et al is one of Obama's now infamous 'strongly worded letter.'

Related:  US Marine imprisoned in Iran a victim of torture, cruelty, family says

Email ThisBlogThis!Share to TwitterShare to FacebookShare to Pinterest
Labels: Iran and Kerry